It’s essentially an irrational, delusional and absurd phenomenon, but it’s been around for ages and has gotten stronger of late. This corrosive and destructive conspiracy theory, otherwise known as antisemitism, is the world’s oldest form of hatred. 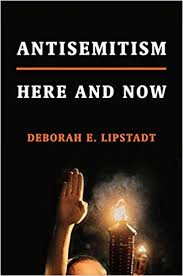 Deborah E. Lipstadt, a professor of modern Jewish history and Holocaust studies at Emory University, casts a practiced eye on it in her newest and noteworthy work, Antisemitism: Here And Now (Schocken Books). In a Note to the Reader, she writes, “Sadly, given the unending saga that is antisemitism, I feel comfortable predicting that by the time this book appears there will have been new examples of antisemitism …”

Not surprisingly, Lipstadt’s prediction has come to pass. Since the publication of Antisemitism late last year, a profusion of antisemitic incidents, from the desecration of Jewish cemeteries to physical attacks  against Jews, have occurred in Europe and the United States.

Yesterday, before I wrote this review, a Times of Israel report indicated that the rising tide of antisemitism in the United States is sowing anxiety among American Jews. “There’s a higher level of fear than I remember any time,” Malcolm Hoenlein, executive vice president of the Conference of Presidents of Major American Jewish Organizations, said. “There’s a sense of tension in the air that there’s something happening.”

Hoenlein’s observation is well grounded. Statistics released by the FBI in 2019 show that Jews were yet again the victims of most hate crimes in the United States last year. In 2018, a rabid antisemite attacked the Tree of Life synagogue in Pittsburgh, killing 11 Jews in the deadliest anti-Jewish attack in American history.

Lipstadt, who shot to prominence a few years ago after taking British Holocaust denier David Irving to court, organizes Antisemitism as a series of letters to two fictional characters: Abigail, a Jewish student who has taken many of her courses, and Joe, a philosemitic Christian colleague.

The pseudoscience of eugenics, which holds that Jews are genetically inferior to non-Jews, further demonized Jews.

In an apt comment, Lipstadt says that antisemitism has become “a means of explaining otherwise inexplicable situations,” such as the outbreak of the bubonic plague in Europe in the 14th century, economic downturns and social and political upheavals. All these maladies were attributed to Jews.

Social media, she persuasively contends, has strengthened the reach of extremists, “allowing (them) not only to communicate more easily with one another but also to make their voices and views heard beyond their adherents.” As a result, extremists can normalize “open expressions” of racial and religious hatred.

U.S. President Donald Trump, she says, has been an enabler of antisemitism.

“Trump and some of his associates have retweeted and reposted videos, cartoons, memes and comments on various social media platforms that come from the alt-right and those affiliated with them,” Lipstadt writes. “As that happens, ideas that were once considered to be outside the pale of civil conversation become mainstreamed.”

Trump used classic antisemitic stereotyping in a speech he delivered to the Republican Jewish Coalition. “Is there anyone in this room who doesn’t renegotiate deals? Probably 99 percent of you. Probably more than any room I’ve ever spoken in.” He added, “But you’re not going to support me because I don’t want your money … You want to control your own politicians.”

In these few words, Lipstadt says, Trump hit virtually every antisemitic button: Jews are driven by an unnatural desire for money, power, control and haggling.

When the antisemitic propagandist David Duke endorsed Trump’s presidential candidacy, Trump declined to condemn him because he did not know him. This was a barefaced lie. A decade earlier, Trump had denounced Duke as a “bigot” and “racist.”

Before he won the Republican presidential nomination, Trump retweeted an image of his Democratic opponent, Hillary Clinton, in front of piles of U.S. dollar bills and alongside a six-pointed star. And at a campaign rally, he invoked the spectre of “global special interests,” a phrase deployed to demonize Jews.

Trump’s ambiguous response to a Unite the Right rally in Charlottesville, Virginia, caused a stir as well. Although he denounced racism, he went on to say that “very fine people” could be found in the ranks of the white supremacist protesters.

In light of Trump’s disturbing comments, Lipstadt concludes, “While Trump is probably not an antisemite, enabling antisemites is itself an antisemitic act that causes as much damage as something that comes from an ideological antisemite. Trump has not created these white supremacist extremist groups or the sentiments to which they adhere. But he has let these reprehensible genies out of the bottle. They are convinced that they have his imprimatur. And he has not disabused them of that notion.”

Lipstadt also rips into Jeremy Corbyn, the outgoing leader of Britain’s Labor Party. As far as she’s concerned, he facilitated expressions of antisemitsm in his party and was reluctant to acknowledge them.  “Like Trump, Corbyn has emboldened and enabled antisemites,” she charges.

Pivoting to Europe, Lipstadt says antisemitism there has been on the rise since the outbreak of the second Palestinian uprising in 2000. Many attacks aimed at Jews have been committed by European Islamic extremists and their sympathizers, she points out. And in some former Soviet satellite states, such as Hungary and Poland, antipathy toward the communist era merges with narratives blaming Jews for the emergence of communism and downplaying the role of local people in the Holocaust.

She commends David Cameron, the former British prime minister, and German Chancellor Angela Merkel for having stood by Jews in the face of rising antisemitism.

Lipstadt is contemptuous of progressives like the British filmmaker Ken Loach, who claimed that reports about the increase of antisemitism in Europe are intended to distract attention away from Israel’s war crimes. “By accusing Jews of instrumentalizing antisemitism, some on the progressive left are denying Jews something they enthusiastically accord to other minority groups.”

As for the Boycott, Divestment and Sanctions movement, which has had an impact on American, Canadian and European universities, Lipstadt says, “BDS is a direct descendant of Marxist antisemitism and anti-Zionism.”

The destruction of Israel is BDS’ overarching objective, she contends. “To argue that only Jews … are not to be permitted to have a national home … is to deny Jewish peoplehood. The negation of Jewish nationhood is a form of antisemitism, if not in intent, then certainly in effect.”

Lipstadt criticizes an Israeli cabinet minister who accused the American actress Natalie Portman of being a BDS supporter after she refused to accept the 2018 Genesis Prize, co-sponsored by the Israeli government and private philanthropists, from Prime Minister Benjamin Netanyahu. Portman immediately denied the accusation. “It was a ludicrous and unfair attack. Not only did this accusation bear no relationship to reality, it also buttressed the argument of those who claim that any criticism of Israel is unfairly categorized as antisemitism.”

To Lipstadt, Holocaust denial — an insidious kind of antisemitism — flies in the face of facts. As she puts it, “The Holocaust has the dubious distinction of being the best documented genocide. For deniers to be right, all survivors would have to be wrong.” Ditto for perpetrators who’ve admitted their guilt.

In closing, Lipstadt issues a stark warning: “If antisemitism becomes the sole focus of (Jewish) concerns, we run the risk of seeing the entire Jewish experience through the eyes of people who hate us.” The “oy” rather than the “joy” should be “the prism through which our view of the Jewish past is refracted,” she sensibly advises.