Lamentably, 2019 will go down in history as a sobering year, judging by the number of known antisemitic incidents reported in the United States by the Anti-Defamation League.

The ADL recorded 2,107 incidents of assault, harassment and vandalism, an increase of 12 percent over 2018. It was the worst tally since the ADL began tracking expressions of antisemitism four decades ago. 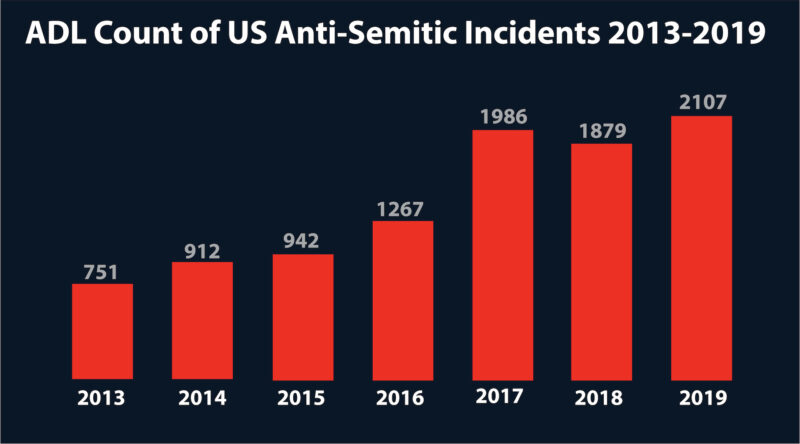 “This was a year of unprecedented antisemitic activity, a time when many Jewish communities across the country had direct encounters with hate,” said the ADL’s chief executive officer, Jonathan Greenblatt, in a statement accompanying the report. “This contributed to a rising climate of anxiety and fear in our communities.”

What, if anything, can be done to stem this worrisome tide of hatred?

Manifestations of antisemitism rise and fall, but every generation must eventually come to terms with it. That said, antisemitism can be fought and contained, as the ADL correctly reminds us.

Here are some practical recommendations to keep this recurring phenomenon down to a minimum.

Civic leaders and public officials should publicly denounce all forms of hate and extremism.

Police forces should be provided with the tools and training to prevent and effectively respond to hate crimes. When they occur, law enforcement officials should take prompt and strong action to investigate every incident.

The federal government, 45 states and the District of Columbia have enacted hate crime laws, but five states have not. Every state should enact comprehensive and inclusive hate crime laws.

Eighty five cities with a population of 100,000 or more did not convey information concerning hate crimes to the FBI. This omission must be addressed because data drives policy. As the ADL says, “We cannot address a problem if we are not effectively tracking and measuring it.”

In this respect, Congress should pass legislation to create grants to promote hate crime prevention training and data collection initiatives.

Domestic extremist groups should be thoroughly investigated, since 270 antisemitic incidents were directly attributable to them. Congress should pass a law to improve coordinated responses, upgrade the collection of data and ensure police training on best practices to combat homegrown terrorists.

Congress should research the online financial ecosystem of hate groups and extremists.

Anti-bias, anti-hate and democracy building education programs should be funded and promoted. In particular, the universal lessons of the Holocaust, including the causes of antisemitism and fascism, must be disseminated.

Laws to deal with online hatred must be updated or implemented. Social media and online game platforms must institute stronger measures to address antisemitism, hate and harassment and assume greater responsibility to enforce their policies.

It’s time to face facts and acknowledge that antisemitic incidents in the United States, spurred by the coronavirus pandemic, are surging.

Racism and bigotry can’t be legislated, regulated or wished out of the existence, of course. But if all, or even some, of these pragmatic recommendations are seriously followed, antisemitism can surely be curbed by the authorities.