It probably will come as no surprise that American Jews formed a binding relationship with Israel through culture and food rather than through politics. During the first two decades of Israel’s existence, they bonded with the new state by reading books about it, buying Israeli crafts, paintings and apparel, attending concerts by Israeli musicians and entertainers, learning Israeli folk dancing, drinking Israeli wine and consuming Israeli produce.

That’s the persuasive thesis that Emily Alice Katz advances in Bringing Zion Home: Israel in American Jewish Culture, 1948-1967 (State University of New York Press), billed as the first book-length study of this topic. As she writes, “Few scholars have fully tackled the subject of Israel’s significance in this period in the wide-ranging cultural realm.”

A historian at the University of California (Irvine), Katz delivers a comprehensive account of it in her path-breaking work of scholarship. 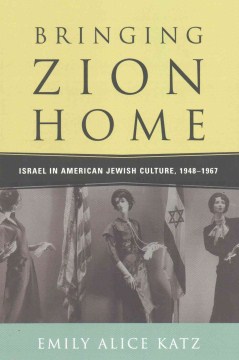 As she suggests, American Jews adopted Israel as a common philanthropic cause following its declaration of independence in 1948 and the outbreak of the first Arab-Israeli war in the same year. Buoyed by the positive reaction of the American press toward Israel, which was seen as a land of courageous pioneers and a place of redemption for Holocaust survivors, Jews who had displayed a distant attitude toward Zionism or had been concerned by the dual loyalty accusation gradually gravitated toward Israel.

Asserting that the United States and Israel shared a common love of freedom and democracy, Jewish leaders sought to demonstrate they were natural allies. Jacob Blaustein, the president of the historically non-Zionist American Jewish Committee, claimed that the two nations could be a positive force for international peace and order. Herbert Lehman, the former governor of New York,       underscored Israel’s strategic value to the United States. In a significant gesture of goodwill, Harry Truman, the U.S. president, encouraged Congress to grant Israel a loan package of $221.5 million.

Katz agrees with the conventional wisdom that Israel rose to the top of the American Jewish community’s political and philanthropic agenda during times of duress. She adds that the “mainstreaming” of Israel was based not on a single incident but rather on “a cumulative body of cultural imaginings and practices.”

Seguing into the core of her theme, Katz contends that Zionist-friendly works of non-fiction and fiction by Jews and non-Jews alike played an integral role in cementing ties between Israel and Jewish Americans.

Walter Clay Lowdermilk’s Palestine, Land of Promise, which first appeared in 1944, was one of more than three dozen books about the Zionist movement and Israel that was published after 1948. Cookbooks were also popular, judging by Lillian Cornfeld’s Israeli Cookery and Molly Lyons Bar-David’s The Israeli Cook Book.

Katz describes Leon Uris’ Exodus as “a masterly public relations coup for post-1948 Zionism” and “the first truly compelling Zionist narrative of Jewish history for a mass audience.” Exodus‘ success, she adds, provided “the boldest evidence yet of a hunger for Israel among American readers.”

In her view, Uris’ novel  — and the 1960 film adaptation — was “critically important in shaping mainstream Americans’ opinions of Israel. The Israel of Exodus called to mind, for many, the American revolutionary and frontier sagas of rugged freedom fighters and righteous conquest.” 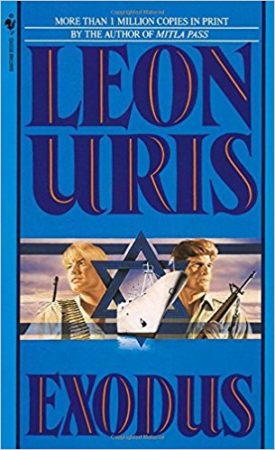 These and other books, she says, contributed to Israel’s “overwhelmingly positive” image in the United States.

Israeli folk dancing, she goes on to say, buttressed the ethnic pride and identity of American Jews, while Israeli folk-pop entertainers such as Shoshana Damari and Yaffa Yarkoni conveyed this subliminal message in nightclubs, television shows and Israel Bonds events.

The appearance of Israeli-manufactured objects and garments in the United States — seder plates, kiddish cups, jewelry, picture albums, souvenirs bearing images of sacred Jewish sites in the Holy Land and bathing suits — fulfilled Israel’s objective of increasing trade with one of its closest friends, defying the Arab economic boycott and tightening its bond with American Jews.

Israeli wine, olive oil, almonds, oranges and honey were also pressed into service in the quest to  build bridges to the United States. “Such goods served an important symbolic function for American Zionists, whose spending served the Zionist cause while bringing home a whiff of the faraway Holy Land,” Katz notes.

In May 1949, Jews in Los Angeles hosted the first group show of Israeli art, and among the works on display were water colors of Tel Aviv and woodcuts of Jerusalem. A few years later, the Gimbel Brothers department store in Philadelphia exhibited the paintings of established artists like Marcel Janco, Moshe Castle and Nahum Guttman, among others.

The Israel Philharmonic Orchestra, founded in 1936 by Bronislaw Huberman, embarked on its first tour of the United States in 1950, stopping in 40 cities. Some performances featured compositions inspired by Israel but composed by Americans. But even the best intentions could land a composer in hot water. In 1951, Issacher Miron, the composer of Tzena, Tzena, sued two composers and a publisher in an American court for having illegally expropriated his song.

With Israel having emerged as a significant cultural touchstone in the Diaspora, tourism grew by leaps and bounds. From 30,000 in 1950, the number rose to 75,000 in 1958, Israel’s 10th anniversary. In 1966, the figure reached 300,000. In the United States, the Reform and Conservative movements launched pilgrimages to Israel, yet no more than one-third of American Jews chose to travel to Israel in the 1950s or 1960s.

Still, as Katz points out, a significant proportion of Jewish Americans were deeply invested in Israel, and this passion enabled them to explore, shape, and strengthen their own Jewish identities.