He survived the hell of  Sobibor — a Nazi extermination camp in Poland where about 250,000 Jews were murdered in less than two years– and better still, he managed to escape from this purgatory, in the largest prisoner revolt of the Holocaust.

Now an American citizen, he has written A Promise at Sobibor, a searing memoir of his boyhood in Poland and survival in a death camp, published by the University of Wisconsin Press.

Born in Izbica Lebelski, a small town where the majority of residents were Jews, he seldom socialized with its Catholic inhabitants. “Centuries of living like this, in basic separation and habitual suspicion of the other, helped breed a kind of comfortable resentment between us and them,” he admits.

He and his friends yearned to leave Izbica, although his family was prosperous by local standards. He hoped to settle in Palestine, but visas were hard to come by.

War came to Izbica a few days after the German army invaded Poland on Sept. 1, 1939. The first German troops to enter Izbica were dressed in clean uniforms and sparkling helmets. “Walking in formation and carrying their guns while singing German war songs, the soldiers were simply terrifying to behold,” he recalls.

The following day, his father, a tanner, returned home, minus his long gray beard. The Germans had cut it off in a blatant show of hostility. And in a harbinger of things to come, they had also murdered six of the town’s Jewish inhabitants.

In accordance with Germany’s non-aggression pact with the Soviet Union, the German garrison was soon withdrawn and replaced by Red Army troops. Life returned to normal, but shortly afterward, the Germans returned, imposing restrictions on Jews and subjecting them to roundups. And in an arbitrary act of cruelty and depravity, the commander of the Gestapo squadron, Kurt Engels, would shoot Jews without warning. On several occasions, Bialowitz barely escaped with his life.

Jews from Germany were deported to Izbica, and Bialowitz got to know one of the German-Jewish families, the Rosenbergers from Karlsruhe. They were secular and assimilated, while his family was religious and insular. “It would have been impossible to throw together two more different families,” he notes.

In November 1942, the Jews of Izbica were marched at gunpoint to freshly dug pits at the edge of town and summarily shot. When he heard Engels shout “fire,” he jumped into a pit, covering his head as bodies fell on top of him. Once the Germans had departed, he climbed out of the pit. “My skin and clothes were soaked in blood from head to toe. I (felt) as though I had emerged from a slaughterhouse.”

Bialowitz describes this horrific event and succeeding ones in an effective spare and detached style.

Over the next few weeks, he and his older brother, Symcha, lived in the forest, pretending to be partisans. Farmers gave the boys food or they stole it from them. Eventually, they returned to Izbica, cowering in a hiding place their father had fabricated.

Poles collaborating with the Germans informed on them, and they were caught. He and Symcha were loaded into trucks bound for Trawniki, a village near Sobibor. They arrived in the camp on April 28, 1943. 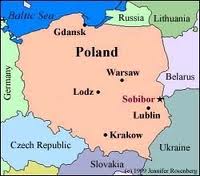 “We had heard from people who had fled the areas near Sobibor and Belzec that the camps in these places were killing centres,” he says. Nevertheless, he did not want to believe these stories.

Bialowitz soon discovered that the dense, foul-smelling fog that enveloped Sobibor emanated from the crematorium, and that escape was virtually impossible. Barbed-wire fences surrounded the camp, a field of land mines had been planted between Sobibor and the forest, and Ukrainian guards with machine guns monitored prisoners day and night.

When jobs were doled out, Bialowitz was assigned to a sorting shed, while Symcha, a pharmacist, was sent to a workshop where confiscated medications and perfumes were stored.

Within days of their arrival, new transports of Jews, mostly from Holland and Poland, arrived by train. On these days, Bialowitz worked as a porter. “After I had helped the Dutch Jews with their bags, many of them offered me a tip for my services! My heart was bleeding, because I knew that in a half hour the human standing in front of me was going to become nothing but ashes.”

The Jews from Holland had no inkling of what awaited them, he observes. “The Germans had thoroughly duped these people into believing that Sobibor was a bona fida resettlement camp.”

An SS officer compounded the illusion by politely informing them that, for sanitary reasons, they were required to take a “shower.” In another macabre touch, he urged them to write postcards to relatives that all was well.

As part of his duties, Bialowitz cut the hair of women who had been consigned to the gas chamber. “Completely naked women enter the shed,” he writes. “Feeling cold as well as ashamed, they cover their bodies with their hands.”

As a reader delves more deeply into the book, the atrocities accumulate.

Bialowitz found a baby hidden inside a bundle. She had a pacifer in her mouth, and a note, in Polish, tucked into her dress read, “Save my baby!”

Prisoners who  could not tolerate the appalling conditions commited suicide. Still others sabotaged the German war effort whenever possible. “Even more than surviving, we want to take vengeance,” he says. “We live for the chance to avenge our dead relatives and friends.”

The arrival of dozens of Red Army prisoners of war on Sept. 23, 1943 gave them hope that an insurrection could be carried out with military precision. In fact, the Soviet soldiers, all of whom were Jewish, devised an escape plan consisting of two phases. Key German officers and Ukrainian guards would be killed with weapons that had been hidden. Telephone wires and electricity lines would be severed. And finally, the 600 slave laborers left in the camp would be directed to freedom.

The revolt erupted on Oct. 14, the Jewish holiday of Sukkot. Many of the first escapees were immediately killed by mine explosions. “I run past dozens of people who have been felled by mines or bullets, some of them not yet dead but too injured to move,” Bialowitz writes. As he raced into the woods, he got stuck in mud, the swampy water rising up to his waist. He panicked momentarily before lifting himself out of the muck and finding  Symcha among the trees.

Two hundred inmates managed to escape. There were five people in Bialowitz’s group, and they were prepared for hardship, having brought compasses, jewels, money, food, a few small guns, some ammunition and a grenade.

Deep in the forest, they encountered a band of Polish partisans. They joined their formation and participated in attacks on German targets. When they realized that, as Jews, they were not really welcomed, they bolted, finding refuge among Polish farmers. In July 1944, they learned, to their joy, that the Red Army had conquered the area.

The Soviets imprisoned the Jews, suspecting them of being Nazi collaborators. They were freed without any explanation. Bialowitz and his brother went back to Izbica, but their presence aroused the resentment of Poles, and they moved on.

Bialowitz wanted to immigrate to Palestine, but his friends dissuaded him, warning him that a war was imminent. He immigrated to the United States, where he became a dental technician and a jeweler, and then married a young woman to whom he had been introduced in Israel.

He ends A Promise at Sobibor with these words: “At last, with my new wife in my new home country, I am finally able to find the peace that I have not enjoyed since I was a child.”