Shortly after Israel’s relatively brief exchange of cross-border fire with Hezbollah on September 1, the prime minister of Lebanon, Saad Hariri, claimed that Hezbollah is not “a Lebanese problem” but “a regional problem.”

Hariri’s comments were both true and false.

Lebanon, which is deeply fractured along religious and ethnic faults, has neither the military strength nor the political will to rein in Hezbollah. Yet Hezbollah, a force very influential in Lebanese politics, is doubtless an internal Lebanese problem because Hezbollah could well drag Lebanon into an unwanted war with Israel. Hezbollah is a regional problem due to its close relations with Syria, currently embroiled in a civil war, and Iran, the predominate Shi’a power in the Middle East. 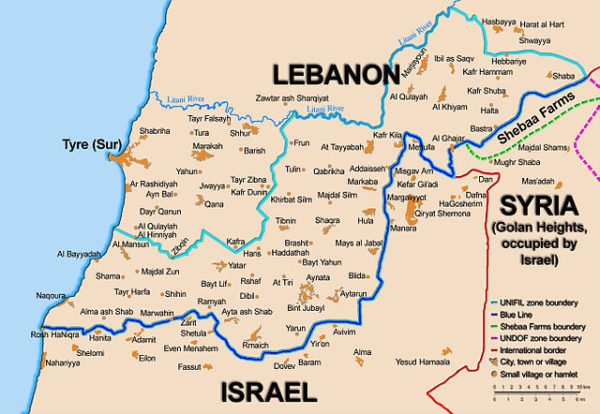 Hezbollah, which emerged in the wake of Israel’s 1982 invasion of Lebanon, fought a guerrilla war with Israel in southern Lebanon from 1982 until 2000 and a month-long war with Israel in the summer of 2006 which essentially ended in a draw. Israel, in the last war, exacted a heavy toll on Hezbollah, but Hezbollah continued firing missiles and mortars into Israeli territory until its very last day. Altogether, Hezbollah launched some 1,500 rockets at northern Israel, bringing it to almost a complete standstill.

By the terms of United Nations resolution 1701, Hezbollah was supposed to be disarmed and withdraw to areas north of the Litani River. Hezbollah has blatantly flouted this resolution and built attack tunnels near the Israeli border, some of which Israel discovered last December. The Lebanese government has stood idly by as Hezbollah has rearmed itself and amassed a stockpile of some 150,000 missiles — many of which were produced in Iran — and entrenched itself in southern Lebanon.

And now Israel faces yet another threat from Hezbollah. In collusion with Iran, which has repeatedly called for Israel’s destruction, Hezbollah is building factories in Lebanon to manufacture precision-guided missiles, which could pose an enormous strategic threat to Israel in the future.

On September 3, the Israeli army announced it had identified such a facility in Lebanon’s Bekaa Valley, a Hezbollah bastion, and published photographs of it near the town of Nabi Sheet.

Hezbollah’s leader, Hassan Nasrallah, acknowledges that his organization possesses some precision missiles, but denies he has factories in Lebanon to manufacture them. Nasrallah airily dismissed Israel’s accusation as a “lie” and a “pretext” to “carry out aggression.”

Israel, which has threatened to strike Hezbollah’s precision missile program in Lebanon, bombed a Hezbollah facility in Beirut last month, destroying machinery vital to the success of the project. Around the same time, the Israeli Air Force thwarted an attempt by pro-Iranian militiamen in Syria to send armed drones into the Galilee. Israel killed a number of these operatives, including two Hezbollah members.

Lebanese President Michel Aoun, an ally of Hezbollah, described Israel’s strikes as “a declaration of war,” while Nasrallah threatened to shoot down Israeli drones from this point onward.

On September 1, in line with a promise made by one of its senior officials, Hezbollah retaliated, hitting an Israeli military vehicle with anti-tank missiles in the settlement of Avivim. In response, Israel fired 100 artillery shells into Lebanese border areas. Nasrallah claimed Israeli soldiers had been killed in the attack, but Israeli Prime Minister Benjamin Netanyahu said Israel had suffered no casualties. During the fighting, Israel staged an evacuation of “wounded” soldiers from an armored personnel carrier to deceive Hezbollah into thinking that Israelis had been killed and that it had won the battle.

Calm was then restored, with both sides proclaiming victory.

The following day, Nasrallah compared the fighting to an incident four years ago, during which Hezbollah killed two Israeli soldiers in the Shebaa Farms area — which Lebanon considers Lebanese territory under Israeli occupation — after Israeli air strikes killed six Hezbollah fighters on the Syrian side of the Golan Heights.

Several days after Nasrallah’s speech, an Israeli drone on a reconnaissance mission crashed in southern Lebanon. Hezbollah claimed to have downed it. Asked whether it had been shot down or had malfunctioned, an Israeli military spokesman said, “It fell, as far as I know,” leaving open the possibility that it had been hit by Hezbollah.

Two days ago, after Israel carried out a big exercise simulating a war against Hezbollah and pro-Iranian militias in Syria, Nasrallah denigrated Israel’s diversionary tactic, saying it showed weakness, and promised to bomb multiple Israeli targets in the next round.

Israel’s tit-for-tat military and verbal exchanges with Hezbollah could be a precursor to another war.

Katz added that Nasrallah may “go down in history as the destroyer of Lebanon.”

This past June, the commander of Israel’s northern front, general Amir Baram, issued a similar threat when he declared that Lebanon may well pay a “heavy price” for allowing Hezbollah free reign in the southern part of the country.

Nasrallah appears undeterred by Israel’s threats, present and past.

Four months ago, he warned Israel that its forces would be destroyed in a new war: “Israel wants a war? Let it go to war. The Israeli units and brigades that dare to enter southern Lebanon will be annihilated and destroyed on live television before the whole world.”

Last month, the commander of Iran’s Revoutionary Guard, General Hossein Salami, claimed that Hezbollah is singlehandedly strong enough to “wipe the Zionist regime off the map.”

Nearly two years ago, in a burst of psychological warfare, Nasrallah urged Israelis to leave the country and “return to the lands you came from, so you will not be the fuel for any war waged by your foolish government.”

The United States supports Israel’s position with respect to Hezbollah.

Last March, during a visit to Beirut, Pompeo urged Lebanon to stand up to Hezbollah’s “criminality, terror and threats.”

“The Lebanese people face a choice,” he said. “Bravely move forward or allow the dark ambitions of Iran and Hezbollah to dictate your future.”

Pompeo’s comments may have been in vain.

Bassil, who’s close to Hezbollah, insisted that Hezbollah is “a Lebanese group that is not a terrorist organization and was elected by the people.”