During a tumultuous six-week period in the summer of 1941, following Germany’s invasion of the Soviet Union and the retreat of Soviet forces from Poland’s eastern borderlands, a wave of pogroms swept over hundreds of cities, towns and villages in a vast region stretching from the Baltic states in the north to Romania in the south.

As Jeffrey S. Kopstein and Jason Wittenberg write in Intimate Violence: Anti-Jewish Pogroms on the Eve of the Holocaust (Cornell University Press), the perpetrators of these crimes, living in localities ranging from Jedwabne in Poland to Kaunas in Lithuania, were the neighbors of the Jewish civilians they beat, tortured, raped and murdered.

Delving into the reasons for this outbreak of bloodshed, which resulted in the deaths of tens of thousands of Jews and unfolded in places from Berezne to Zolkiew, the authors conclude that these atrocities took place under conditions of state collapse where there was no central government.

“The retreat of Soviet personnel meant there was no functioning state capable of reining in anti-Jewish violence,” explain Kopstein and Wittenberg, both of whom are political science professors at the University of California. “The presence of the Germans and their local allies meant that local civilian populations were permitted and even encouraged to attack Jews.” 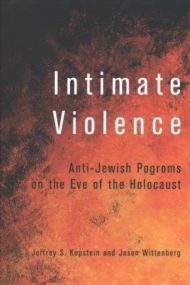 In a revisionist work, they argue that pogroms were most likely to occur where there were “lots of Jews, where those Jews advocated national equality with non-Jews, and where (political) parties advocating national equality were popular.”

Conversely, Kopstein and Wittenberg claim that pogroms did not break out in areas where economic competition between Jews and Christians was fiercest, or where Jews were accused of having supported the Soviet military occupation.

These observations are tempered by their claim that pogroms were “relatively rare events” in the areas they studied. In the eastern Polish borderlands, which were occupied by Soviet and German armies, pogroms erupted in 219 towns, cities and villages, comprising only nine percent of the localities populated by Jews and Christians alike.

“Most  communities never experienced a pogrom and most ordinary non-Jews never attacked Jews,” they say. “The vast majority of Poles and Ukrainians did not perpetuate pogroms, and the vast majority of Jews were not the victims of them.”

In general, the Jewish minority was less likely to be subjected to physical assaults by Christian neighbors where Jews were better integrated into local society and where they were regarded as part of the community and deserving of protection. Referring to such locales, Kopstein and Wittenberg write, “We do not doubt that some form of informal antisemitism was widespread, but it was not intense enough in most places to have produced a pogrom.”

Jews were most vulnerable to pogroms where they were most segregated from the Christian population and thus considered a foreign element and where they were perceived as a threat to the Christians’ political domination. Elaborating on this point, they say, “Our central claim is that pogroms were most likely to occur where Jewish calls for cultural autonomy and the popularity of ethnically accommodationist political parties were widespread enough to threaten Polish plans for a nationally homogeneous state.”

They add, “The environment conducive to pogroms was less one of Polish nationalism — for this was strong everywhere — than a large Jewish population calling for Polish recognition of its cultural and political rights.”

Pogroms, too, broke out in areas of Poland where the right-wing nationalist National Democrats, led by Roman Dmowski until his death in 1939, were popular. Prior to World War II, Dmowski’s relation to the so-called Jewish question was legislative, but it included economic boycotts, social exclusion and, when required, outright violence.

Kopstein and Wittenberg reject the widely-held theory that pogroms in Poland were revenge for Jewish support for communism. “At the mass level, the communists did not attract many votes from Jews. The strongest supporters were to the found among the Belarusians.”

Nevertheless, they acknowledge the obvious: Jews in eastern Poland usually greeted the arrival of Soviet soldiers with relief. “Having experienced open discrimination and many pogroms in interwar Poland, Soviet rule, harsh as it might have been expected to be, offered at least the prospect of civic equality. It was certainly preferable to the Nazi rule in western Poland.”

They contend that “communist universalism” among Christians created a basis for “intercommunal solidarity” with Jews. “Communist non-Jews were thus less likely to perpetuate pogroms and more likely to prevent them from happening.”

Among Polish nationalists, however, the opposite was true. They were convinced that Jews were partial to communism and that they played a role in the Soviet occupation of Poland.

Ethnic Ukrainians in Transnistria, which had been occupied by the Red Army, usually displayed an unwillingness to participate in pogroms. But Ukrainians who were members of the anti-Soviet Organization of Ukrainian Nationalists supported pogroms. Kopstein and Wittenberg quote Iaroslav Stetsko, the temporary leader of the short-lived Ukrainian state, as endorsing “the destruction of the Jews and the expedience of bringing German methods of exterminating Jewry to Ukraine.”

Priests in the Ukrainian Greek Catholic Church were both proponents and opponents of pogroms, they note. One of the protectors of Jews, Farther Andrey Sheptysky, the church’s metropolitan, condemned pogroms and sheltered Jews.

In Lithuania, successively conquered by the Soviets and the Germans, one-quarter of its Jewish communities were affected by pogroms. Anywhere from 5,000 to 10,000 Jews were killed in these massacres, an ominous prelude to the Holocaust, which resulted in the destruction of 95 percent of Lithuania’s Jewish population.

“In one of the most gruesome incidents of the war, in the Lithuanian city of Kovno (Kaunas), on June 27, 1941, a German army photographer witnessed a pogrom in which a Lithuanian man beat to death forty-five to fifty-five people with a crowbar, one by one, over the course of around forty-five minutes,” they write. “Onlookers, women and children included, clapped. When he finished, they sang along as he played the national anthem on an accordion.”

Pogroms occurred in smaller towns, carried out by Lithuanian nationalists and bands of thieves and hooligans. These atrocities were perpetrated with the approval of the Germans.

At roughly the same time, pogroms broke out in Bukovina and Bessarabia. “Similar to the Polish and Lithuanian cases, the chaotic and lawless period between the withdrawal of the Red Army and the restoration of political authority provided ample opportunity for anti-Jewish violence on the part of the civilian population and the Romanian military.”

The pogrom whose reverberations are still heard broke out in Iasi on June 28, 1941, causing the deaths of hundreds of Jews.

Taken together, these pogroms constituted a tragedy that traumatized Polish, Lithuanian and Romanian Jews. Kopstein and Wittenberg, in Intimate Violence, leave us with a better understanding of these terrible events.