Joan Nathan, the renowned cookbook author, has travelled to some 15 countries on five continents in search of material. Her newest book, King Solomon’s Table: A Culinary Exploration of Jewish Cooking from Around the World, published by Alfred A. Knopf, is an impressive showcase of her knowledge and expertise.

She begins her journey in Kochi, a somnolent town in southern India whose chief attraction is the 16th century Paradesi Synagogue, which I had the pleasure of visiting some years ago. Like many tourists before her, Nathan was struck by the inscriptions on its walls. One of them suggests that Jewish traders from the Land of Israel, bearing wheat and other foodstuffs, may have reached India during the reign of King Solomon.

Kochi is illustrative of Nathan’s modus operandi. In King Solomon’s Table, a beautifully-crafted and handsomely illustrated volume of 382 pages, she presents a wealth of stories and recipes about Jewish cuisine from all corners of the globe that speak to its international and cosmopolitan character. 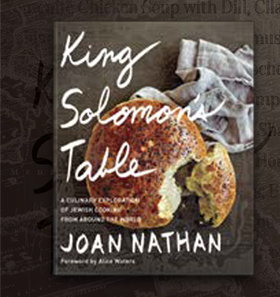 A regular contributor to The New York Times, she’s a food maven par excellence. California chef Alice Waters respects her erudition. In the foreword, she describes Nathan as “the most important preservationist of Jewish food traditions.” I can’t vouch for this fulsome claim, but I do believe that Nathan, in this colorful coffee-table volume, is true to her objective of following “the threads of Jewish food culture across centuries and continents.”

Receptive to all gastronomic influences, Nathan delves into Ashkenazi and Sephardi fare, always starting with an intriguing story and ending with an easy-to-follow recipe.

Her short essay on burekas, the Middle Eastern/Balkan puff pastry filled with ingredients such as feta cheese and spinach, is typical of her approachable style. Calling them one of the “crowning jewels” of the Ottoman Empire’s legacy, she sings their praises in several delectable stories.

She moves on to the bagel, which is closely identified with Jews, and proceeds to introduce a reader to Thatte Idli, steamed Indian rice dumplings slathered with nuts and raisins. Further along, in a nod to Hungary and Romania, she writes of the glories of apple pancakes and cornmeal ricotta pudding.

Turning to the Middle East, Nathan provides readers with a recipe for hummus laced with preserved lemon and cumin. It’s a dish to behold. As she writes, “Even with all the brands sold today — and some are very good — I prefer to make my own.” Touche!

Also piquing her fancy are five fairly exotic dishes — a Persian version of sweet and sour stuffed grape leaves, an Indian-Israeli-style carrot salad, a Balkan spinach salad with walnuts and cilantro, a Greek eggplant salad and a Bulgarian red pepper and tomato salad.

Having spent a week in Morocco, I was drawn to her recipe for harira, the spiced Moroccan vegetable soup with chickpeas, cilantro and lemon. I also liked her recipes for winter squash soup with coconut milk and a hot pepper, lentil soup with ginger and cumin and Yemenite chicken soup with dill, cilantro and parsley.

Being partial to bread, I was hooked by Nathan’s recipes for multi-seeded fennel-flavored challah, pletzel (onion and poppy seed flatbread) and pumpernickel rye.

Nathan’s recipes for slightly sweet and sour cabbage and pickled herring spread reminded me of boyhood meals at home. Cod with tomatoes, dried plums, onions and pine nuts, a dish from Italy, seemed tantalizing, as did Hungarian chicken paprikash with dumplings, Indian chicken with cardamom, cumin and cilantro, and Libyan lamb or beef stew with white beans and spinach.

Let’s not forget the sweets.

I was taken by her recipes for tahini cookies, hamantashen with poppy seed, chocolate and apricot filling and orange-almond mandelbrot, a blend of East and West.

King Solomon’s Table, packed with mouth-watering recipes and compelling stories, transports a reader on an unforgettable culinary journey with stops in a host of tantalizing destinations.