Britain’s embattled and divided Labor Party, led by Jeremy Corbyn since 2015, is heading for an acrimonious showdown whose outcome could well affect its electoral prospects.

Early in September, the party will decide whether to fully adopt the International Holocaust Remembrance Alliance’s definition of antisemitism, which has been accepted by scores of countries, including Britain, Canada and the United States.

During the third week of July, party members passed a motion endorsing it, thereby challenging an earlier decision by the party’s governing body, the national executive committee, to accept only parts of it.

The committee, loyal to Corbyn, aroused indignation by dropping several phrases pertaining to Israel, which has sharply polarized opinion within a party that once attracted legions of Jews.

According to the International Holocaust Remembrance Alliance, antisemitism kicks in when Israel’s existence is defined as a “racist endeavor,” when Jews are accused of being “more loyal to Israel” than their own country, when “contemporary Israeli policy” is compared to that of Nazi Germany’s, and when Israel is subjected to a “double standard.”

The decision by the committee to water down this definition of antisemitism, while satisfying Israel-bashers and closet antisemites, heightened the current debate in the party about antisemitism, a topic of red-hot contention since Corbyn’s accession to power three years ago.

Before he ran for the party’s leadership, Corbyn — a supporter of the Palestinian cause who hails from its hard left faction — described Hamas and Hezbollah as “friends.” In 2010, he compared the Israeli blockade of the Gaza Strip to the siege of Leningrad by Nazi Germany. In 2012, he praised a mural in London deemed by many observers to be antisemitic.

Since 2015, a number of party members, including Muslims, have posted antisemitic comments and tweets.

Two years ago, an inter-parliamentary committee accused the party of creating a “safe space for those with vile attitudes towards Jewish people.”

Recently, the then president of the Board of Deputies of British Jews, Jonathan Arkush, citing Corbyn’s endorsement of the mural, claimed he holds “antisemitic views” that could drive Jews out of Britain. Corbyn has vehemently denied this accusation.

Still others in the Jewish community have charged that Corbyn has done too little to curb antisemitism within party ranks.

Several months ago, demonstrators assembled outside Parliament to vent their anger and disappointment with Corbyn’s stewardship of the party.

Late last month, in a demonstrative expression of dissatisfaction with its decision to sideline passages about Israel from the definition of antisemitism, three major Jewish newspapers in Britain — The Jewish Chronicle, The Jewish News and The Jewish Telegraph — published a scathing editorial on their front pages under the headline of United We Stand and claimed that a Corbyn government would be an “existential threat” to the Jewish community. 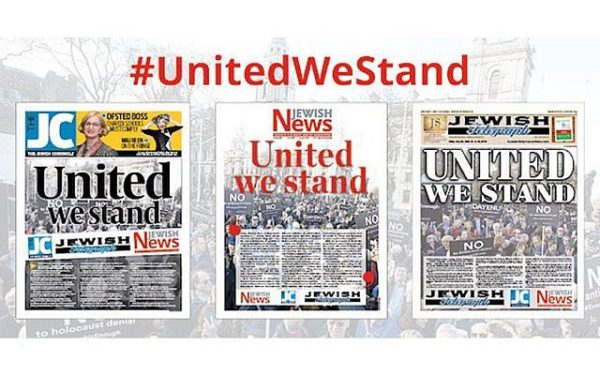 Rejecting this claim, the party issued a statement claiming it poses “no threat of any kind whatsoever to Jewish people,” and is “committed to tackling and eradicating antisemitism in all its forms.” Still others in the party, including Pete Willsman, a member of the national executive committee and a Corbyn ally, have branded his detractors in the Jewish community as “Trump fanatics.”

The British prime minister and leader of the Conservative Party, Theresa May, has joined the ongoing debate, having accused Corbyn of attemping to “redefine antisemitism.” Quoting Britain’s chief rabbi, Efraim Mirvis, she said that Labor’s decision had sent an “unprecedented message of contempt for British Jews.”

Mirvis, in a letter to the party’s governing council, had warned that “adoption of Labor’s new alternative to the internationally accepted IHRA definition will send an unprecedented message of contempt to the Jewish community.”

If Mirvis is correct, Jews who have always voted for the party may well reassess their fealty toward it in the next general election.