Prime Minister Benjamin Netanyahu of Israel made a surprise visit to the Arabian Peninsula Sultanate of Oman October 25-26. It was part of his campaign to gain support from Persian Gulf states in Israel’s conflict with Iran.

He said that Israel has moved closer to the Gulf Arab countries, while Iran criticized the visit, saying that Israel was seeking to create divisions among Muslim countries.

Alarm over Iran’s destabilizing activities in Syria, Iraq, Yemen and Lebanon has sparked behind-the-scenes diplomacy between some Arab states and Israel.

In 1998, Oman became a founding member of the six-nation Gulf Cooperation Council, and this little-known nation has long acted as a regional go-between among other countries in the region.

The Israeli leader met with Oman’s long-serving ruler, Sultan Qaboos bin Said al Said, in power since overthrowing his father in a coup in 1970. The two sides discussed ways to achieve peace and stability in the Middle East.

Though the two countries have no formal diplomatic relations, Oman described Israel as an “accepted” Middle East state.

The country hosted secret talks between Iran and the United States in 2013 that paved the way for broader negotiations to curb Iran’s nuclear ambitions.

As it retains relations with Iran, Hamas and Hezbollah, Israel’s enemies, might Netanyahu be seeking Oman’s help in dealing with them, as well as with Syria?

“The visit was symbolic and extraordinary,” remarked Yoel Guzansky, a senior researcher at the Institute for National Security Studies at Tel Aviv University and author of The Arab Gulf States and Reform in the Middle East: Between Iran and the “Arab Spring.” Symbolism, he remarked, “is very important in the Middle East.”

“We are not saying that the road is now easy and paved with flowers, but our priority is to put an end to the conflict and move to a new world,” bin Alawi told the meeting October 27. In February, he visited Jerusalem’s Al-Aqsa Mosque.

Following the signing of the Oslo Accords in 1993, the then Israeli prime minister, Yitzhak Rabin, made the first visit by an Israeli leader to Oman. In 1996, Rabin’s successor, Shimon Peres, met with the sultan. In 2008, the then-Israeli foreign minister, Tzipi Livni, met with Omani foreign minister bin Alawi.

From the late 17th century, the Omani sultanate was a powerful state, competing with Portugal and Britain for influence and trade in the Persian Gulf and Indian Ocean. Omani influence or control extended across the Strait of Hormuz to parts of modern-day Iran and Pakistan. The Pakistani city of Gwadar was an overseas possession of Oman from 1783 to 1958.

An Omani dynasty also ruled the island of Zanzibar and parts of the adjoining east African mainland. Zanzibar was a valuable property as the main slave market of the Swahili Coast, and it became an increasingly important part of the Omani empire, until the British finally made Zanzibar a protectorate in 1890.

Oman itself came under the defence umbrella of Britain until the 1980s. It also survived a protracted rebellion based in the mountains of the southern province of Dhofar. Between 1963 and 1976, this was the scene of one of the forgotten conflicts of the Cold War. 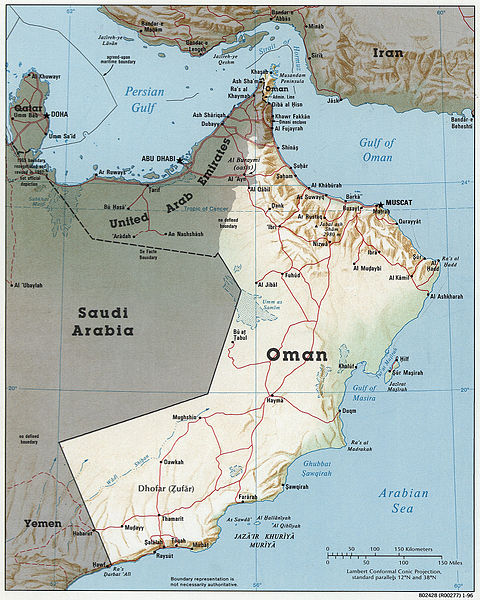 Oman’s continued importance lay both in its energy reserves and geostrategic location, controlling the southern part of the Strait of Hormuz, through which Persian Gulf oil is shipped.

Oman today is a relatively stable and developed Middle Eastern country, largely at peace with its neighbors.

Henry Srebrnik is a professor of political science at the University of Prince Edward Island.