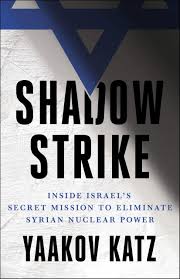 “It is a tale of espionage, political courage, military might and psychological warfare on a national scale,” writes Katz, the editor-in-chief of the Jerusalem Post.

“What happened in 2007 is a playbook for how one country neutralized an existential threat,” he adds.

As we know, it was not the first time Israel had bombed a nuclear reactor in an Arab country. In 1981, Israel struck the Osirak reactor in Iraq in line with a policy known as the Begin Doctrine, a reference to Menachem Begin, the Israeli prime minister who ordered its destruction on the rationale that Israel cannot allow its enemies to acquire nuclear weapons.

This explains Israel’s current determination to stop Iran, its arch foe, from joining the nuclear club. As Katz puts it, “If Syria was allowed to get away with it, Iran would feel emboldened.”

It’s debatable why Syria, Israel’s enemy, sought a nuclear reactor in the first place. The consensus seems to be that President Bashar al-Assad wanted to solidify his regime, create a balance of power with Israel and become a leader in the Arab world.

The Mossad, Israel’s external intelligence agency, discovered what Syria was up to by secretly hacking the computer of Ibrahim Othman, the director of its Atomic Energy Commission. After downloading his files, Mossad agents installed a Trojan horse, providing Israel with permanent access to his computer. What became clear was that Syria was building a nuclear facility in a valley deep in the desert in the Deir ez-Zor region along the banks of the Euphrates River.

Having established Syria’s intentions, Israeli Prime Minister Ehud Olmert sent the Mossad’s director, Meir Dagan, to Washington to warn U.S. Defence Secretary Dick Cheney that Israel would not accept a nuclear weapon in the hands of Syria. “The news was earth-shattering,” writes Katz. “Until then, there was no evidence in the U.S. intelligence community to support was Dagan was claiming.”

Dagan was a strong advocate of deploying military force to bomb the reactor. Syria, attempting to keep the project a secret, hadn’t even placed a missile battery or an anti-aircraft gun near the reactor.

Shortly after Dagan’s meeting with Cheney, Olmert phoned President George W. Bush and asked him to bomb the site. “For Israel, having America carry out the strike would be a win-win,” says Katz. “The reactor would disappear without Israel’s involvement, meaning that the chance of a large-scale war erupting was limited.”

In Israel’s view, the reactor had to be bombed before it became operational. “No one wanted to be responsible for radioactive material leaking into the Euphrates River and then adversely affecting the lives of generations of Syrians,” Katz quotes a top-ranking Israeli official as saying.

The Bush administration was not of one mind about the feasibility of bombing the reactor.
In principle, Bush agreed with Cheney, who argued that an American strike would enhance U.S. credibility in the Middle East at a time when the United States was embroiled in a grinding guerrilla war in neighboring Iraq. If done right, Cheney argued, the use of military force could send a strong signal to Iran, among others. Elliott Abrams, a senior U.S. official, basically agreed with Cheney, but thought that Israel should carry out the strike to restore the deterrence it had lost during the Second Lebanon War in 2006.

Bush wanted to rein in Assad, who supported anti-American rebels in Iraq, but was chary of striking Syria. Bush feared that a U.S. bombing raid would undermine the United States’ relationship with Israel and erode its regional standing.

On July 13, Bush informed Olmert of his decision. “I cannot justify an attack on a sovereign nation unless my intelligence agencies stand up and say it’s a weapons program,” he told Olmert, advising him  to take the issue to the International Atomic Energy Agency.

Bush’s assessment was endorsed by two U.S. cabinet ministers — Secretary of Defence Robert Gates and Secretary of State Condoleezza Rice. They feared that Syria would retaliate by attacking American troops in Iraq. They also had doubts about the veracity of Israel’s intelligence.

Responding to Bush, Olmert declared that Israel intended to destroy the Syrian reactor. Bush, in turn, made it clear to select officials that the United States should not interfere with Israel’s raid.

The Israeli strike was carried out by four F-15Is and four F-16Is carrying about 20 tons of bombs. The planes flew toward Syria along its border with Turkey, dipping into Syrian territory on the last leg of the flight. They reached the target, flying extremely low, just after midnight, and the reactor was destroyed beyond repair. Syria fired off some missiles, but they were far off the mark.

Interestingly enough, Israel and Syria had just begun indirect peace talks through Turkish mediation when the Israeli Air Force swooped in on al-Kibar.

Israel did not take credit for the raid, fearing a Syrian military response if Syria lost face. Since the Israeli government had no idea what Syria’s reaction would be, Israel’s Northern Command was placed on high alert in case a war broke out. Syria released an official statement claiming that its air defence systems had chased the Israeli aircraft away. Olmert maintained Israel’s policy of strict silence, as if nothing had happened. Days after the raid, he told reporters he was ready to resume peace talks with Syria.

As for Bush, he congratulated Olmert on a job well done. According to Katz, the Pentagon and the CIA were pleased as well, resulting in a “newfound appreciation and respect for Israel’s intelligence and military capabilities.” He adds,”Whatever stain the Second Lebanon War had left on Israel’s image, it now seemed to be gone.”

In the wake of Israel’s raid, the Mossad and the CIA established new lines of communication, agreeing to launch a joint mission to assassinate Hezbollah’s chief of operations, Imad Mughniyeh, in Damascus.