Since the fall of the Ottoman Empire a century ago, the Middle East has fallen into a dismal state of chronic instability, lurching from one coup d’état to another, from one war to the next. But since the U.S. invasions of Afghanistan and Iraq in 2001 and 2003 respectively, the stability of the region has been further compromised by the rise of the Islamic State jihadist organization and the turmoil triggered by the so-called Arab Spring rebellions, which sparked civil wars in Syria, Libya and Yemen and contributed to the downfall of authoritarian regimes in Tunisia and Egypt.

The events of September 11, 2001, the collapse of central governments, the outbreak of jihadist insurgencies, the resurgence of Iran, the attempt by Islamic State to reestablish a caliphate and the rising tensions between Sunni and Shia Arabs have exacerbated the unrest that currently ails the Middle East.

Patrick Cockburn, a British foreign correspondent who covers the Mideast for the Independent daily newspaper, thoroughly explores this turbulence in The Age of Jihad (Verso), which draws on his notes, diaries and stories from 2001 to 2015. Although it focuses on Iraq, it swoops in on countries like Saudi Arabia, Syria and Libya and reminds us that eight wars are now raging in Muslim countries in and around the Mideast. Cockburn’s ability to range far and wide is certainly one of the strengths of his book.

Cockburn has a jaundiced view of the United States’ interventionist approach in the area. “America’s wars launched in the aftermath of 9/11 led Washington to overplay its hand disastrously,” he writes. “This was not so obvious at the time as it is now.”

He argues, not without merit, that the American occupation of Iraq precipitated a revolution in that country, which had been ruled by a succession of strongmen culminating in the dictatorship of Saddam Hussein. U.S. intervention in Iraq ended the long reign of Sunni Arab rule and destabilized the sectarian balance of power, ushering in a period of endemic violence. This outcome dismayed neighbouring Sunni nations like Jordan and the Gulf States, which resented the formation of a Shia government in Baghdad likely to have close relations with Iran, the predominant Shiite power.

“The downfall of Saddam Hussein has exacerbated, to a degree never seen before, the ethnic and religious tensions between Kurds, Sunni Arabs and Shia Arabs, the three great communities to which almost all Iraqis belong,” he says.

Concerned by the sectarianism that defines Iraq today, many Iraqis now carry two sets of identity documents, Sunni and Shia, for the sake of self-preservation. The Iraqi army and police are divided along sectarian lines, and Baghdad has broken up into heavily-armed Sunni and Shia enclaves.

That’s not the only problem gripping Iraq. Infectious diseases and malnutrition have returned with a vengeance. The economy cannot produce sufficient jobs. Corruption is rampant. And last but not least,  Iraq has become a breeding ground for Al Qaeda and Islamic State terrorists.

Despite his disdain for America’s misadventure in Iraq, Cockburn blames Saddam for much of its misfortunes. As he bluntly puts it, “He destroyed Iraq. When he became president in 1979, he gained total control of a country with a well-educated population, an efficient administration and extensive oil reserves. In a quarter of a century, he impoverished his people, drove many of them into exile and left the Iraqi oilfields in the hands of foreign troops.”

In particular, Cockburn notes, Saddam launched two disastrous wars that ruined Iraq and reshaped the Mideast. The first of these was the eight-year war with Iran, which claimed the lives of hundreds of thousands of Iraqis. The second was the invasion of Kuwait, which brought a ferocious U.S. military response that, in turn, prompted a crushing United Nations economic embargo.

Turning his thoughts to Libya, Cockburn observes that the current struggle for power there, plus NATO air strikes against the forces of Moammar Gaddafi in 2011, left a dangerous political vacuum that has yet to be filled.

Cockburn’s analysis of the civil war in Syria is perceptive.

“Five distinct conflicts have become tangled together in Syria: a popular uprising against a dictatorship, which is also a sectarian battle between Sunni and Alawites; a regional struggle between Shia and Sunni, which is also a decades-old conflict between an Iranian-led grouping and Iran’s traditional enemies: notably the U.S. and Saudi Arabia. Finally, at another level, there is a reborn Cold War confrontation: Russia and China versus the West.”

Cockburn describes Islamic state as the “most successful jihadi movement ever,” saying that the birth of its caliphate in Iraq and Syria in 2014 was the most radical change in the “political geography” of the Mideast since the 1916 Sykes-Picot agreement. But what will become of Islamic State in the wake of the current Arab/U.S. military offensives in the Iraqi and Syrian cities of Mosul and Raqqa?

Turning to Saudi Arabia, he contends that its dual policy of encouraging jihadism abroad while suppressing it at home has disintegrated. But what will replace it?

This is but one of the intriguing issues Cockburn deals with at length in this highly informative book. 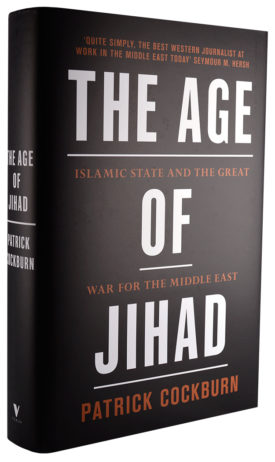