The Polish philosopher Jozef Tischner wrote, “When reflected in a crooked mirror, the face of a neighbor is distorted. The neighbor is always worse than we can imagine, he is false, treacherous, evil.”

Tischner’s observations may be applied to Louise Steinman, an American Jew of Polish descent for whom Poland was “a black hole, a gnawing void.” As she elaborates in The Crooked Mirror: A Memoir of Polish-Jewish Reconciliation (Beacon Press),”It was a given that Poland was a country full of people who hated Jews, who allowed and perhaps even abetted an unspeakable genocide on their soil.” 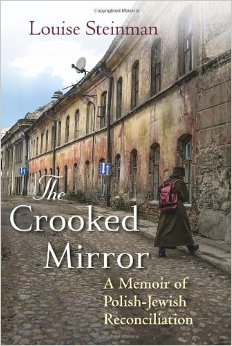 Steinman, of course, is referring to the Holocaust. During the long night of the Nazi occupation of Poland, 90 percent of its 3.3 million citizens of Jewish descent were murdered or died of starvation or disease. A great many of them perished in German extermination camps like Sobibor and Treblinka, which had been built for that purpose in Poland.

Given her negative feelings about Poland, Steinman, a resident of Los Angeles, was quite taken aback when a local rabbi, Don Singer, brought up the topic of Polish-Jewish reconciliation in one of his talks. “He felt a responsibility to bring Poles and Jews together. I couldn’t imagine why.”

The very concept had “the ring of a bad joke,” she writes, citing a postwar pogrom in the Polish city of Kielce that claimed the lives of 40 Jewish Holocaust survivors.

As far as she was concerned, Poland resonated anguish and betrayal.

About a decade after later, Rabbi Singer called Steinman — the co-director of the Los Angeles Institute for the Humanities at the University of Southern California — and offered her an all-expenses paid trip to Poland under the auspices of the Bearing Witness Retreat, an interfaith program at Auschwitz-Birkenau. She was not eager to go, but accepted the invitation with “a mixed sense of anticipation and dread.”

The trip, which would be the first of several to Poland in the next seven years, altered her view of a country that, as Rabbi Singer claimed, had received a “bum rap.”

In The Crooked Mirror, a cogently-written account of her experiences in Poland, Steinman discovers a nation she had barely known and leaves a reader with thoughtful observations about the fraught nature of Polish-Jewish relations.

She addresses that point early on: “Though Poland had been home to Jews as far back as the twelfth century, they were always a distinctive presence. They had different customs, religious rituals, dietary restrictions. Many spoke only Yiddish. Whether, how and when the Jews saw themselves as Poles and whether, how and when the Poles regarded Jews as Polish has always been a complicated equation.”

Steinman begins her odyssey in Auschwitz-Birkenau, where she meets a Polish Catholic who had been deported to that camp in 1940 at the age of 19. “I came away confused and inspired,” she says.  “I’d discovered my lack of knowledge about Polish history and the Poles’ own narrative of resistance, as well as the encumbrance of my own unexamined prejudices.”

On her maiden trip to Poland, she also visited Rodomsko, her paternal grandmother’s home town. Known in Yiddish as Radomsk, it was where the family of Herschel Grynszpan came from. Grynszpan, it will be recalled, was the young man who shot and killed a German diplomat in Paris in November 1938, an event that triggered Kristallnacht in Germany.

Steinman’s travels in Poland were facilitated by competent Polish Catholic guides. Christopher Huszczanowski, whom she describes as “a walking encyclopedia of  Warsaw Jewish history,” guided her and her friend around town. Among other places, they stopped at the Okopowa Street cemetery, the oldest Jewish cemetery in continuous use in Eastern Europe.

Another guide, Tomasz (Tomek) Cebulski, a much younger man who had been raised in Oswiecim, the town closest to Auschwitz, had written a Jagiellonian University thesis on prewar Jewish life in Poland and had studied Hebrew in Israel.

As they got to know each other, Cebulski, a devout Catholic, disclosed that he had grown up with only “very negative stereotypes” about Jews. “Tomek’s readiness to acknowledge and openly examine the bigotry of his youth was startling,” she writes. “His candor reassured me.” Cebulski also told Steinman that, in Polish eyes, “Jews had not only welcomed the despised Communist takeover, (but) had actually helped facilitate it.”

Yet, as Steinman points out, Polish national poet Adam Mickiewicz immortalized a Jewish innkeeper named Jankiel as one of  the principal characters in his epic, Pan Tadeusz. “Jankiel is both an observant Jew and an ardent Polish patriot, a combination of loyalties not uncommon among Poland’s Jewish citizens who fought for Polish independence alongside their Catholic neighbors. Many of them considered themselves Jewish Poles, not Polish Jews.”

Cebulski accompanied Steinman to Kazimierz, the former Jewish quarter in Krakow, and there they attended a klezmer concert at the restored Temple Synagogue. The star of the show, Leopold Kozlowski, a native of Lwow, is one of the few Jewish klezmer musicians who survived the Holocaust.

At the Center for Jewish Culture, in the heart of Kazimierz, she talked to program director Robert Gadek, who grew up in eastern Poland. Asked whether Poles missed Jews, he replied. “There’s no yes or no answer. It’s complicated.” Poles, Gadek added, have trouble with any “otherness.”

While in Kazimierz, she paused at the Galicia Jewish Museum, founded by Christopher Schwartz, a British photographer whose father was a Polish Jew from Krakow.

From Cebulski, Steinman learned that Holocaust education has radically changed in Poland: “New textbooks were being published, there were new efforts to reach a more complete history and to commemorate Poland’s Jewish citizens. There were more and more commemorative plaques to mark places of Jewish historical memory.”

Paraphrasing the Polish American historian Jan Gross, Steinman concludes that Poles acquitted themselves in checkered fashion during the Holocaust: “There were thousands of Poles who risked everything to aid their Jewish neighbors, many more who did nothing, and plenty who had aided in their (Jewish) neighbors’ humiliation and capture.”

Steinman is critical of the annaul March of the Living program, which brings Jewish students to Poland and Israel. The Israelis, in particular, regard their Polish peers as the inheritors of a legacy of antisemitism and cling to the preconceived notion that the Holocaust took place in Poland because “the Nazis counted on the Poles’ help in exterminating the Jews.”

As Steinman admits, she once shared these “erroneous ideas.”

One of the most interesting Poles in The Crooked Mirror, Maciej Ziembinski, is a journalist who publishes an alternative weekly in Radomsko. Raised in a tolerant household, but bombarded with antisemitic myths by a priest, Ziembinski has dedicated himself to preserving Radomsko’s Jewish past.

She is also impressed with Krzysztof Czyzewski, the director of the Sejny-based Borderland Foundation, which seeks to preserve the region’s multicultural heritage.

Steinman visits the northeastern town of Jedwabne, where a pogrom took place on July 10, 1941, but her chapter on this infamous incident is rather disappointing. Her account of a Jewish memory project in Lublin, Grodzka Gate, is far better.

As she reaches the end of her book, Steinman cuts to the core with a telling observation: “My own generation of postwar descendants of Polish Jews was cut off from the history of our parents’ and grandparents’ pasts because we hadn’t learned Yiddish, the language in which the yizkor books were written. It had never occurred to me that this same language barrier also prohibited Poles from accessing the Jewish history of their towns.”

She ends on an upbeat note.

Visiting La Bibliotheque Polonaise in Paris, she meets its chief curator, Anna Czarnocka, who asks what kind of a book on Poland she plans to write.

“The Poland in my head,” Steinman says, prompting Czarnocka to state, “I also hope you will write about the Poland in your heart.”

“I replied without hesitation. Yes, the Poland in my heart.”