For the past three and a half decades, Iran, formerly a staunch U.S. ally, has been a thorn in the side of the United States.

Since the 1979 Islamic revolution, which swept away the pro-American Pahlavi monarchy and ushered in a theocratic regime hostile to U.S. interests in the Middle East, Iran and the United States have been dangerously at odds.

Despite their very real differences, they share a common enemy — Islamic jihadism, as exemplified by Al Qaeda and Islamic State. Due to these contradictory undercurrents, the United States has adopted what Jay Solomon describes in The Iran Wars (Random House) as a “schizophrenic” strategy toward Iran. The United States, he argues in this cogent account of the animosity between Washington and Tehran, has “alternated between seeking to woo the regime and trying to overthrow it.” 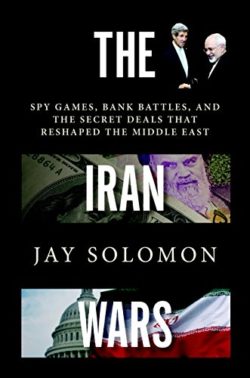 Solomon, the chief foreign affairs correspondent of The Wall Street Journal, categorizes these tensions as the biggest national security challenge facing both nations. He basically lays the blame for this confrontational relationship on Iran, which, he writes, is “driven by an Islamist ideology” that regards the United States as its “principal rival for dominance in the Middle East.”

In much of this book, Solomon focuses his attention on one overarching and interlocking topic: Iran’s nuclear program, which aroused American, Israeli and Arab fears, and the difficult and lengthy process which culminated in the 2015 landmark agreement curbing it for about a decade or more.

Calling the deal President Barack Obama’s “signature foreign policy achievement,” one that might be compared to President Richard Nixon’s rapprochement with China in the early 1970s, Solomon says it seems to have marked a new era in mercurial U.S.-Iran relations.

Since the advent of the 1979 Islamic revolution, tensions have flared regularly between the United States and Iran.

The United States tacitly supported Iraq during the 1980-1988 Iran Iraq War. During this period, Iran, in league with Hezbollah, bombed the U.S. embassy in Beirut. In the following decade, Iran was complicit in the bombing of the Khobar Towers military compound in Saudi Arabia and the Israeli embassy and the Jewish community center in Buenos Aires, Argentina.

Obama‘s predecessor, George W. Bush, demonized the Iranian regime, placing it in the “axis of evil” category. Iran, through local surrogates, bombed U.S. bases in the Middle East, tried to drive out the Americans from Afghanistan and Iraq and attempted to disrupt Israel’s peace negotiations with the Palestinian Authority by supporting rejectionist groups like Hamas, Islamic Jihad and Hezbollah.

Obama took a radically different approach, viewing detente with Iran as a crucial step to stopping the spread of nuclear weapons, pacifying the region and countering jihadism. “He saw Iran as part of a solution,” he notes.

Calling the Iran nuclear accord one of the riskiest “diplomatic bets” ever made by an American president in modern times, he claims it might yet fuel an arms race in the Mideast and embolden Iran to rapidly expand its nuclear program once the agreement expires.

He claims that the prospect of a nuclear deal so fixated the Obama administration that it failed to act decisively in Syria after the Syrian army crossed Obama’s “red line” and used chemical weapons against the rebels in the summer of 2013.

There was a time, however, when Washington’s bilateral relations with Tehran might have improved. This moment occurred in the wake of Al Qaeda’s attack on the United States on September 11, 2001. It opened up the possibility of cooperation between the United States and Iran, but both sides squandered the opportunity.

Fearing it could be the next Middle Eastern nation to be invaded by the United States, following its invasion of Iraq in 2003, Iran offered to normalize relations with Washington, but its overture was not taken seriously by the Bush administration.

According to Solomon, the subsequent U.S. occupation of Iraq worked to Iran’s advantage. Saddam Hussein, the Iraqi dictator, had been a bulwark against any expansion of Iranian influence into Iraq. But his ouster enabled Iran to bolster its political and economic clout in Iraq and elsewhere in the region.

In the meantime, Iran continued to cultivate its alliance with Syria, its closest Arab ally in the region. After the outbreak of the civil war in Syria, Iran rushed to Syrian President Bashar al-Assad’s aid. As Solomon put it, “The collapse of the Assad regime would (have) choked off Tehran’s ability to use the land bridge in Syria to funnel arms and money to its allies in Lebanon and the Palestinian territories — the front lines in Iran’s war against Israel.”

Iran’s ally in Lebanon, Hezbollah, fought a war with Israel in 2006 and sent troops to Syria to reinforce Assad’s government. Iranian influence also manifested itself in the Gaza Strip, where Hamas reigns supreme.

These developments were of great concern to the United States, but the decision in 2009 by Iranian President Mahmoud Ahmadinejad — a radical fond of taunting the West and threatening Israel with destruction — to accelerate Iran’s nuclear program redoubled Washington’s efforts to contain Iran.

His somewhat moderate successor, Hassan Rouhani, was generally viewed in a more positive light in Western capitals. Rouhani, having harshly criticized Ahmadinejad’s shrill tactics, blamed him for needlessly alienating Iran from the international community. Rouhani’s foreign minister, Mohammed Javad Zarif, who was also seen as a man with whom the West could do business, sounded a tone of moderation and disavowed Ahmadinejad’s denial of the Holocaust.

Having determined that Iran might be willing to freeze its nuclear program in exchange for sanctions relief, which cost the Iranian economy dearly, the United States established a secret diplomatic channel to Iran through Oman. William Burns, the U.S. deputy secretary of state, played a pivotal role in the talks to follow.

Time was of essence, given the Obama administration’s well-founded fears that Israel might launch a reckless preemptive air strikes against Iran’s nuclear sites. “The White House was intensely focused on heading off such an Israeli attack and trying to forge some common ground with the new Rouhani government in Tehran,” says Solomon.

He claims that U.S. Secretary of State John Kerry, the lead negotiator in the protracted negotiations that pitted Iran against five other world powers, left the impression among some diplomats that he wanted an agreement more than the Iranians. In this spirit, he notes, Kerry made a succession of concessions to Iran, giving ground on uranium enrichment and indicating that Iran would not have to dismantle its entire nuclear infrastructure, as Prime Minister Benjamin Netanyahu of Israel demanded.

In Solomon’s judgment, Iran has complied with the provisions of the 2015 agreement by having scaled back its nuclear program. “This was no small achievement, given that both the United States and Israel feared Iran had been just months away from building a nuclear bomb,” he says. “But progress on the Iran deal (has been) undercut by Iranian aggression.”

As might have been expected, Iran’s hardline supreme leader, Ayatollah Ali Khamenei, has not toned down his verbal barrages against the United States. Iran has become much more deeply involved in the civil wars in Syria and Yemen. Iran has conducted ballistic missile tests, defying United Nations bans. Iran continues to arm Hezbollah and Hamas and to threaten to wipe Israel off the map.

It seems clear that the United States and Iran have yet to settle their accounts.