The New York City neighborhood of Harlem, an African-American enclave for about the past century, used to be home to the second largest Jewish community in the United States. Only the Lower East Side had a greater Jewish population. During the penultimate years of the 19th century and the first two decades of the 20th century, the heyday of the Jewish presence in Harlem, close to 175,000 Jews lived there. 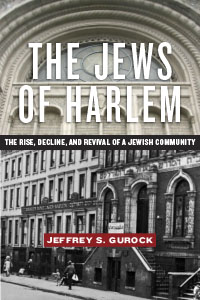 Jeffrey S. Gurock, a professor of Jewish history at Yeshiva University, explores this little-known phenomenon in an intriguing book, The Jews of Harlem: The Rise, Decline, and Revival of a Jewish Community, published by New York University Press.

Once a remote, sparsely populated, almost rural neighborhood in the northern tip of Manhattan, Harlem was subjected to such urbanization and congestion that it was soon unrecognizable. And as blacks poured in, whites moved out, transforming Harlem yet again.

The tenements, brownstones and apartment buildings of Harlem became a Jewish mecca from about the 1870s onward. According to Gurock, the most important thoroughfare of Jewish Harlem was 116th Street and Fifth Avenue, near Congregation Ohab Zedek, a renowned synagogue.

“One of this congregation’s greatest attractions during the 1910s was its famous cantor, Yossele Rosenblatt, perhaps known to film aficionados as the voice that chanted Kaddish in the original The Jazz Singer, which starred Al Jolson,” writes Gurock.

Several generations of Central, East European and Sephardic Jews, as well as black Jews, settled in Harlem. Solomon Carvalho, the photographer who accompanied the explorer John Charles Fremont on his ill-fated expedition to the Rocky Mountains in the 1850s, and Sholem Aleichem, the Russian-born writer who created some of the most memorable characters in Yiddish literature, both lived there.

Harlem also attracted the likes of Benjamin Franklin Peixotto, a merchant, diplomat and scion of one of the first Jewish families to settle in North America, and Cyrus Sulzberger, a member of the family that owned The New York Times.

Sophie Tucker, the entertainer, launched her career in Harlem. Wearing blackface, she was billed as “America’s most prominent coon singer.” Fanny Brice, whom Barbra Streisand would portray in the movie Funny Girl, was an occasional Harlem resident, as was Al Jolson. George Gershwin, the composer whose father and uncle operated restaurants in Harlem, first became hooked on music during that formative period.

During the first decade of the 20th century, four groups of black Jews established themselves in Harlem, but the New York Board of Rabbis refused to recognize them as Jews.

“In the 1920s and 1930s, the question was still very much alive within nativist and racist circles about whether Jewish immigrants and their children were racially the same as the white Anglo Saxon Protestants whom it was said built America,” writes Gurock. “To be projected as part of the dominant white race, many Jews felt it was important to separate themselves from African Americans.”

Unlike lower Manhattan, Harlem never had a substantial needle trade industry, but it was dotted with many small tailor shops, some of whom were owned by members of the Bund, the Jewish socialist organization. In 1918, the Bund opened the Harlem Arbeter Ring School, which had an enrollment of nearly 300 students by 1920 and was considered the finest Yiddish institution of its kind in the city.

By the 1920s, Jews and other whites began leaving Harlem en masse, spurred on by improvements in the rapid transit system, the availability of housing in places like Williamsburg and Queens and the massive influx of blacks from nearby neighborhoods and the southern states.

In general, Jews were not as overtly bigoted as, say, the Irish, who participated in “nigger chases.” Nevertheless, Jews “harbored many of the American prejudices of the day,” says Gurock, citing several examples.

The Jewish manager of a local theater was sued for his discriminatory policy of seating blacks only in the balcony. Jewish real estate agents and landlords charged prohibitively high rents to blacks. Blumstein’s, a major department store, was boycotted in the mid-1930s on the grounds that it employed black workers solely in the most menial jobs.

In the decade following World War II, there was a slight increase in the Jewish population of East and Central Harlem, but from that point onward, the number of Jews living in Harlem declined precipitously as the neighborhood degenerated and the crime rate rose.

The Jews who remained lived in “some of the worst conditions” in New York, says Gurock, whose family hailed from Harlem.

With its gentrification, whites began moving back to Harlem in modest numbers. By 2006, 13,800 caucasians, representing 6.5 percent of its population, lived there. It would appear that a disproportionate percentage of the newcomers were Jews.

This trend should not be blown out of proportion. As he says, “At present, Harlem Jewry is a small fraction of Gotham’s Jewish polity and flies largely beneath the community’s research screen.”