The Muslim Brotherhood, the most organized and cohesive political force in Egypt following the collapse of Hosni Mubarak’s authoritarian government in 2011, ruled the country from 2012 to 2013. During this interim period, Mohammed Morsi was at Egypt’s helm as its first democratically elected president. Morsi squandered the opportunity the electorate had handed him, catalyzing a mass movement that climaxed with his ouster and brought Egypt back to autocracy. 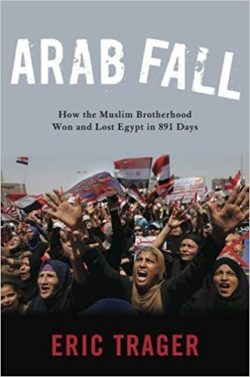 The two-year era during which these tumultuous events occurred is the subject of Eric Trager’s first-class book, Arab Fall: How the Muslim Brotherhood Won and Lost Egypt in 891 Days, published by Georgetown University Press.

The crisis reached a breaking point on June 30, 2013 as millions of Egyptians poured into the streets to demand Morsi’s removal. It climaxed on July 3, when the defence minister, Abdul Fattah al-Sisi, a Morsi appointee, removed Morsi from office and imprisoned him and thousands of his followers in a purge that defanged the Muslim Brotherhood.

Trager, a fellow at the Washington Institute for Near East Policy, expertly charts its rapid rise and dramatic fall in a brilliantly-researched book that is already the definitive work on the topic. He provides a cogent analysis of the Muslim Brotherhood, its incremental seizure of power and its miscalculations in governance.

Trager defines the Muslim Brotherhood, founded in 1928 by Hassan al-Banna to address the Islamic world’s decline and challenge Western hegemony in the Middle East, as a rigidly hierarchical organization whose goals were to establish an Islamic state in Egypt and thereby transform Egyptian society. Its long-term objective was to form a global Islamic state that could resist the West. He further describes the Muslim Brotherhood as a deeply insular organization that regards outsiders with tremendous suspicion and its opponents as enemies of Islam. These characteristics, he notes, were both its strength and weakness.

In Trager’s estimation, the Muslim Brotherhood posed the greatest political threat to Mubarak’s regime, but during the early days of the nation-wide uprising, its leaders were reluctant to join in, fearing a repressive backlash from the military. Under President Gamal Abdel Nasser, the Muslim Brotherhood had been dissolved and thousands of its members arrested and tortured.

By 2011, popular frustration with Mubarak’s government had been building for years. Unemployment had risen to dangerous levels. Mubarak’s apparent attempt to anoint his younger son, Gamal, as his successor had alienated Egyptians. The severely rigged parliamentary elections of 2010 was symptomatic of the corruption that pervaded Egypt.

As Trager points out, the first wave of protests coincided with the eruption of the second Palestinian rebellion in 2000. Egypt’s response to the U.S. invasion of Iraq in 2003 intensified dissatisfaction. From 2004 to 2005, Cairo was rocked by a series of anti-regime protests. The fatal police beating in 2010 of an activist critical of Mubarak only worsened matters.

In the days before mass protests broke out in Egypt on January 25, 2011, the Muslim Brotherhood’s Supreme Guide, Mohammed Badie, issued a statement sharply critical of the government while calling for as “comprehensive national dialogue.” Badie’s call for reform rather than revolution upset some of his followers.

Nonetheless, the Muslim Brotherhood played a key role in supporting the uprising, says Trager. It joined neighborhood watch groups to protect protesters from regime thugs. It worked to sustain the sit-in within Cairo’s Tahrir Square, the epicentre of the uprising. And it secured the square.

But for good reason, it did not want to become the face of the revolt.

The Muslim Brotherhood was aware that many Egyptians distrusted its theocratic program. It knew that the armed forces were not favorably disposed toward its Islamist ideology. The Muslim Brotherhood had renounced violence in the 1970s and had participated in parliamentary elections since 1984, but it was still widely regarded as a subversive group. And as Muslim Brotherhood leader Abdel Moneim Abouel Fotouh himself suggested, Western nations feared an Islamic takeover of Egypt, which fell into the American orbit after its alliance with the Soviet Union fell apart.

With Mubarak’s resignation, the Supreme Council of the Armed Forces assumed power in Egypt for the next 16 months. Fearing its adverse reaction, the Muslim Brotherhood announced it would neither run a presidential candidate nor pursue a parliamentary majority. In the runup to the 2012 election, it adhered to its virulently anti-Western rhetoric and reiterated its intention to end Egypt’s 1979 peace treaty with Israel.

Morsi, a high-level Muslim Brotherhood functionary who had been chosen to be its presidential candidate, defeated runner-up Ahmed Shafik by a narrow margin. Despite his conciliatory assurances that he would follow a pragmatic course, he was an Islamic ideologue who hated the West and Israel and was prone to antisemitic utterances, writes Trager.

In one of his first moves as president, he decapitated the Supreme Council of the Armed Forces and fired its figurehead, General Mohammed Hussein Tantawi. He then appointed Abdel Fatah al-Sisi as director of military intelligence, proceeded to amass full executive and legislative authority and empowered himself to appoint a new Constituent Assembly. Morsi also stacked his team, the civil service and governorships with Muslim Brotherhood members and sympathizers. As Trager observes, he had no intention of honoring his campaign promise to rule inclusively.

During his brief reign, fuel shortages and traffic congestion in cities worsened and long bread lines continued to be a problem. “Egypt remained at risk of economic calamity,” he says.

Mori’s foreign policy decisions left something to be desired. He refused to have any direct contact with Israeli diplomats and officials. He became the first Egyptian president in three decades to visit Iran, which broke ties with Egypt in 1979. He cozied up to Hamas, which ruled the Gaza Strip. Nevertheless, he kept his lines of communications open with the United States, meeting U.S. Secretary of State Hillary Clinton and her successor, John Kerry.

Five months after his election, he issued a constitutional declaration granting himself virtually unchecked power And he limited the rights of religious minorities. These decisions ignited immediate, massive and often violent protests demanding his resignation.

Shortly afterward, the army released its first statement since the crisis began, warning of “disastrous consequences” if the impasse was not resolved. Further protests in the summer of 2013 brought more chaos. On July 2, the military seized the state-controlled newspaper Al Ahram and printed a road map of its plans. The following day, Sisi addressed the nation, disclosing Morsi had been deposed. Minutes later, the Muslim Brotherhood’s television stations were taken off the air, two of its senior leaders were arrested and warrants were issued for the arrest of 300 more of its top-ranking officials.

Vowing to fought back until Morsi was reinstated, the Muslim Brotherhood seemed uncowed by the turn of events. Its combative attitude prompted Sisi to unleash a concerted campaign of violence. On July 8, security forces killed 51 Morsi supporters in Cairo. On August 14, several hundred Morsi supporters were slain in the deadliest massacres in contemporary Egyptian history. In the following months, Sisi all but decimated the Muslim Brotherhood.

Trager’s assessment of its legacy is harsh. As he puts it, “It left the country worse off. It rushed to power without a coherent policy agenda. It picked fights with virtually every political institution and made enemies of almost every political force. And it responded to virtually every crisis by either demanding or grabbing more power, deepening Egypt’s political polarization and bringing the country to the brink of severe civil strife.”