On July 16-17, 1942, French police in Paris rounded up 13,152 stateless Jews — men, women and children — and consigned them to purgatory. Some were taken to a detention camp in Drancy, near Paris. The rest were crammed into the Velodrome d’hiver, a Parisian sports stadium, before being transported to Drancy. From there, they were all shipped by rail to Auschwitz-Birkenau, where they perished.

Maurice Rajsfus, a French Jewish survivor who witnessed this infamous roundup, dissects it in a workmanlike book, The Vel D’Hiv Raid: The French Police at the Service of the Gestapo (DoppellHouse Press), which was originally published in France 15 years ago. The English language edition, translated by Levi Laub, contains a foreword by Michel Warschawski, an Israeli journalist whose mother lived through the German occupation of France.

Rajsfus, a former investigative reporter for Le Monde, was 14 years old when thousands of police, at Germany’s request, arrested the Jews. His parents, immigrants from Poland, were swept up in the net and sent on to Auschwitz. (He discusses this personally painful and unforgettable aspect in another book, Black Thursday: The Roundup of July 16, 1942, which is also published by DoppellHouse Press)

As he states, the Velodrome d’hiver raid was neither the first nor the last of the “racial operations” conducted by Vichy France, ruled by World War I hero Marshall Henri Philippe Petain. From 1941 to 1944, he authorized numerous raids. The Vel D’Hiv raid was the biggest and most notorious one of the lot.

Resulting in the deaths of some 75,000 Jews, these raids were proceeded by the formation of the General Commission for Jewish Affairs, headed by Xavier Vallat, and the enactment of antisemitic legislation which marginalized the Jewish community.

Pierre Laval, the Vichy prime minister, preferred to keep French police out of the operation, but he withdrew his opposition.

Two individuals, a German and a Frenchman, were the chief organizers of the Vel D’Hiv raid — Theo Dannecker, the head of the Gestapo in Paris, and Rene Bousquet, the Vichy police chief.

A few police officers informed friends and neighbors of its imminence. Word got to Jews, but very few could take advantage of the tip. According to Rajsfus, the community’s Jewish leadership had “no desire” to spread the news.

More than 4,000 police were assigned to the task, and not a single one refused to participate. “The victims were threatened with death without any verbal restraints,” he writes. Netting 3,118 men, 5,919 women and 4,115 children, it was not as successful as the German authorities had hoped it would be. They had counted on rounding up about 22,000 Jews.

By July 17, almost 7,000 Jews had been confined to the Velodrome d’hiver, where conditions were terrible. As a witness wrote, “No water to drink or to wash up with. The toilets, about a dozen of them, were quickly stopped up and nobody could get them working again. They overflowed and flooded the prisoners. This soon led to a rash of fainting spells, hysterical ftrs, eruptions of illness and suicide attempts.”

In short, the atmosphere was “hellish.” 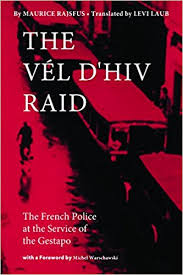 Public opinion was generally supportive of the raid, noted the General Intelligence Service. But there was a smidgen of disapproval from the public, stemming from rumors that families would be broken up and that children under the age of six would be turned over to the public welfare department.

A week after the raid, a Roman Catholic cardinal, in a letter of protest to Petain, condemned it. Another cardinal, a staunch Petainiste, said, “We do not overlook the fact that the French authorities have a problem to solve, and we appreciate the difficulties that the government must face.”

The Vichy press prepared Parisians for it.

“The police have confirmed that 80 percent of attempted murders in the Paris regions are the work of Jews, most of them foreigners,” one newspaper article typically blared in a bid to demonize Jews.

In France’s unoccupied zone, however, most newspapers, including Le Figaro, ignored the raid.

For decades afterwards, French governments were silent. But on July 16, 1995, President Jacques Chirac openly acknowledged France’s complicity in the Holocaust. “It was the French police, alone, who carried out this dirty job,” he declared in no uncertain terms.

Seventeen years later, President Francois Hollande sounded a similar note: “The truth is that French police — on the basis of lists they had themselves drawn up — undertook to arrest the thousands of innocent people trapped on July 16, 1942. The truth is that no German soldiers — not a single one — were mobilized at any stage of the operation.”