Born in Warsaw in 1928, the daughter of assimilated Polish Jews who perished during the six-year German occupation of Poland, she managed to leave the Polish capital as Jews were being herded into the doomed Nazi ghetto. In 1944, as a member of the underground Home Army, she participated in the failed Warsaw rebellion against the Germans. 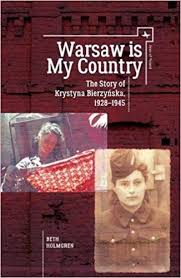 Five years ago, on the 70th anniversary of that revolt, she agreed to be interviewed by Beth Holmgren, a professor of Slavic Studies at Duke University. Holmgren’s book, Warsaw Is My Country: The Story of Krystyna Bierzynska, 1928-1945 (Academic Studies Press), is wide-ranging in scope and sometimes deeply emotional. As Holmgren states in the introduction, it “tells us a great deal about the complicated identities, obstacles, and possibilities Jews encountered in interwar urban Poland.”

Krystyna’s father, Beniamin (Benio) Bierzynski, was a prosperous fur merchant. Her mother, Stefania, had been an aspiring artist before her marriage. The Bierzynskis considered themselves Poles of the Jewish persuasion rather than Polish Jews. Polonized, cosmopolitan and secular, they moved in Christian and Jewish social circles, and lived in a spacious apartment in a sedate neighborhood of broad boulevards, lush parks and lavishly stocked shops.

“Her family seemed living proof that acculturated Jews with enough money and taste could make friends with liberal Christians and enjoy the same culture and leisure pastimes,” writes Holmgren.

Despite her elegant lifestyle and Polish appearance, Krystyna was subjected to random antisemitic taunts. Bierzynska’s parents enrolled her in a French school in Warsaw to shield her from the Catholic-Jewish tensions that pervaded most Polish schools.

Due to quotas that restricted the admission of Jews to universities, her older brother, Dolek, was denied entry to a Polish medical school, forcing him to study in France. Being a Polish patriot, he enlisted in the Polish army, only to discover he would have to convert to Christianity to be an officer. As Holmgren says,”Polish Catholic recruiters held a negatively stereotyped view of Jews’ combat potential, suspecting them of physical weakness, selfishness and dishonorable behavior.” Dolek approached conversion as a “necessary formality,” yet never told his father about it.

With the German invasion of Poland on September 1, 1939, Benio turned over his share of the business to his partner, an ethnic German. Toward the end of that fateful month, the Bierzynskis’ apartment was damaged by a German bombing raid, compelling them to live with relatives.

Defying German orders, Benio and his family refused to wear the yellow star, nor did they move into the ghetto. At the suggestion of one of their Christian friends, they converted to Christianity in order to receive protective baptismal certificates.

Benio succumbed to cancer in the spring of 1940 and was buried in a Christian cemetery in the small town of Zabierzow. In the wake of his death, Stefania coached her daughter on how to pass as a Polish Catholic.

“During this period, Krystyna came to embrace the Catholic Church as an oasis of comfort and strength,” says Holmgren. “She knew that church-going constituted camouflage.” Yet Krystyna kept going to mass because she liked it.

Toward the end of 1941, Stefania acquired new papers that identified her as Stefania Zakrzewska, but in the following year, she was arrested by a Polish policeman. Holmgren speculates she was either executed in jail or murdered in the Treblinka extermination camp. Before she was caught, she asked a Christian friend, Dr. Nina Marczewska, the wife of a former government minister, to look after Krystyna.

A little later, she received new papers identifying her as Sofia Labedzka and began living with another Christian family, the Raczkowskas. “Here, she felt loved and cared for by her surrogate family,” says Holmgren.

During the 1943 Warsaw ghetto uprising, Krystyna could smell the smoke from the fires consuming the sealed-off neighborhood. The devastation of the ghetto terrified and tormented her. As she told Holmgren, “I knew I probably had relatives burning there, but there was nothing I could do. Nothing.”

The destruction of the ghetto impelled her to join the Home Army, where she worked as an orderly. Since some of its units and commanders were not partial to Jews, Krystyna kept her real identity a secret, or, as Holmgren euphemistically puts it, “a private family affair.”

Krystyna’s participation in the 1944 Warsaw uprising taxed her immensely, but she was proud of what she had endured after two months of fierce fighting. Along with 1,728 female members of the Home Army, she was sent to a German prisoner-of-war camp.

After the war, she was reunited with Dolek, who had been a doctor in General Wladyslaw Anders’ army. “Of course, Dolek did not advertise his Jewish heritage, abiding by a policy of ‘don’t ask, don’t tell’ similar to what Krystyna observed in wartime Warsaw,” says Holmgren. “There were many high-ranking regular army officers who had been right-wing National Democrats before the war, members of a party notorious for its antisemitic stance.”

Dolek distinguished himself during the war and received Poland’s highest military decoration for courage and heroism.

As a result of their experiences, Krystyna and Dolek jointly decided to lie low as Jews and to emigrate. The Holocaust had “rendered Jewishness even more alien and Catholicism and ethnic Polishness the norm,” says Holmgren.

Krystyna immigrated to the United States, married and raised a family. Dolek found refuge on the Caribbean island of Grenada.

It had been a long and arduous journey for both of them.