Canadian scholar Anna Shternshis focuses on the lives of Jews in the Soviet Union before, during and after World War II in her thoroughly-researched and wide-ranging book, When Sonia Met Boris: An Oral History of Jewish Life Under Stalin (Oxford University Press). 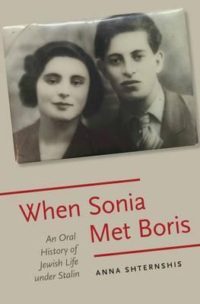 A Soviet immigrant herself and the director of the Anne Tanenbaum Center for Jewish Studies at the University of Toronto, Shternshis interviewed 474 Ashkenazi Jews for this study. Her respondents were born in the Russian empire or the Soviet Union between 1906 and 1928. With the collapse of the Soviet Union in 1991, they emigrated, settling mainly in Israel, Canada, the United States and Germany. They were highly educated, with more than half possessing the equivalent of a college degree.

“The project started with the goal of fleshing out the history of Jewish life in the Soviet Union before the war,” writes Shternshis, a professor of Yiddish language and literature. It soon evolved into a much broader account of how certain seminal events affected Soviet Jews holding mid-rank white-collar jobs in large, medium and small urban centers.

These were the Stalinist purges of the late 1930s, World War II, the Holocaust, the state-sponsored antisemitic campaign and the Jewish struggle for emigration.

In the first few pages, she introduces a reader to Boris and Sonia, an elderly couple whose experiences were remarkably similar to the majority of Soviet Jews during that tumultuous period. “Boris and Sonia lived through the entire history of the Soviet Union both suffering and enjoying it, like so many of their peers.”

From there, she segues farther afield and examines the lives of still other Soviet Jews. But first, she provides context. Three million self-declared Jews lived in the Soviet Union on the eve of the war, with 80 percent residing in big cities. The Soviet annexation of the Baltic states and parts of Poland and Romania brought the Jewish population to about five million.

During the Nazi occupation, 2.7 million Jews perished. Included in that statistic were 140,000 Red Army Jewish soldiers. By the end of the war, 2.3 million Jews were left in the Soviet Union.

From 1948 to 1953, the unchallenged ruler of the country, Joseph Stalin, began restricting Jewish rights. These were the black years of Soviet Jewry. Members of the Jewish Anti-Fascist Committee were arrested and executed. Jewish cultural institutions were shuttered. Jews were subjected to discrimination in education and employment and were eased out of the armed forces and the diplomatic corps. The nefarious Doctors’ plot unfolded.

Prior to that era, Jews enjoyed a sense of upward mobility in a country where antisemitism was officially frowned upon. As a result, the intermarriage rate skyrocketed. In Leningrad and Kharkov, for example, 37 percent of Jewish men and 26 percent of Jewish women married non-Jews. And in Moscow, nearly 50 percent of all Jews wed Christians by 1939. Jewish religious weddings had virtually disappeared by that juncture.

Nearly all of Shternshis’ interviewees had abandoned Jewish traditions and Yiddish by then. But as ethnic intolerance increased, most Jewish men and women married fellow Jews. “Their chief motivation was to avoid the risk of marrying an antisemite,” she says.

With urbanization and modernization, families became smaller. The plunging birthrate was particularly evident among Jews. By the 1970s, Jewish women had two or fewer children.

Among the younger generation of Jews in the 1930s, work was considered very important and was deemed a factor in social mobility. Engineering and medicine were seen as especially appealing professions.

As open antisemitism surged in the wake of the war, Jewish students were stymied by unwritten restrictions in institutions of higher learning, prompting parents to encourage their children to strive for higher grades in high school so as to circumvent discrimination. Jews faced exclusion in such fields as law, medicine and the arts, but did not face barriers in engineering and economics and in trade schools. And in Central Asia, the Urals and the North Caucasus, Jewish enrollment actually went up.

Engineering was one of the most popular professions among Jews. “As a whole, engineers represented both the most successful segments of Jews in Soviet society overall and the least troubled among all (respondents),” she notes.

David, born in Moscow in 1925, told Shternshis the following story: “I never hid that I was a Jew. Why hide it? It’s not a source of pride, but still. I, so to say, have suffered quite a bit because I was a Jew. You couldn’t get a job if you were a Jew. For me it was harder than it was for my father.”

“Paradoxically, the existence of popular antisemitism helped some families keep traces of Jewish tradition,” she writes. “Jewish women’s cooking was one way for Jewish spouses to support each other in a hostile society. A women’s ability to cook fancy Jewish meals was as desirable as men’s ability to protect their women from derogatory remarks, which was described by women as an important quality for a husband.”

Shternshis suggests that the 1948 murder of Solomon Mikhoels, the prominent actor and the director of the Moscow State Yiddish Theater, was one of the most traumatic events to rock Jews. Yet Yiddish actors remained optimistic and did not regard their Jewish background as a liability. “Instead, they told stories of Jewish culture empowering and protecting them and giving them pride,” she says.

The Doctors’ Plot, also orchestrated by Stalin, deeply affected Jewish physicians and medical researchers. “Although the details of problems at the workplace vary, most interviewees spoke of being reduced in rank, non-Jewish superiors taking credit for their work, losing their research positions altogether, or going into another sphere of medicine, usually a less prestigious one,” she writes.

Stalin’s sudden death in 1953 saved Jews from what may have been further restrictions and indignities. Lavrentia Beria, the general secretary of the Communist Party, thereupon announced that the Doctors’ Plot had been fabricated and that the imprisoned doctors had been found innocent and released.

Stalin’s successors loosened restrictions on Jews to some degree, but they were reimposed with a vengeance following Israel’s victory in the 1967 Six Day War, leading to a renewed sense of Jewish consciousness among considerable number of Jews and a concomitant desire to leave the Soviet Union.