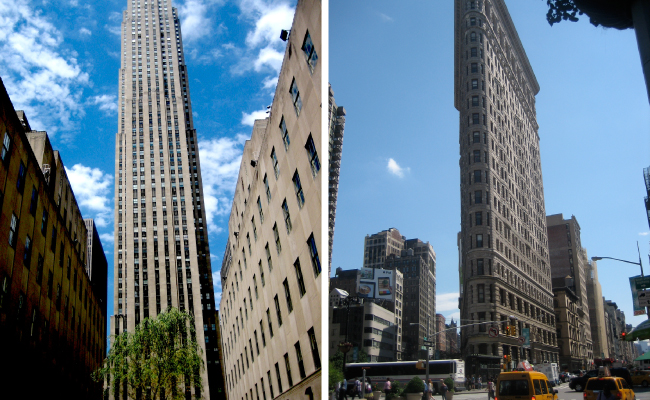 The Rockefeller Center in mid-Manhattan and The Flatiron Building, one of New York City's first skyscrapers. 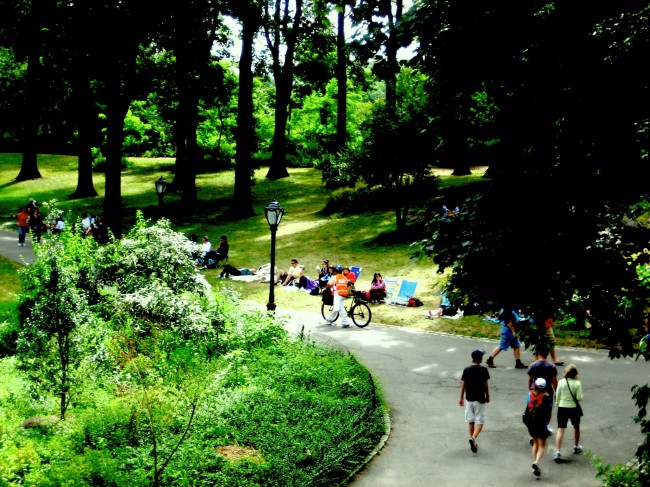 A tranquil nook in Central Park. 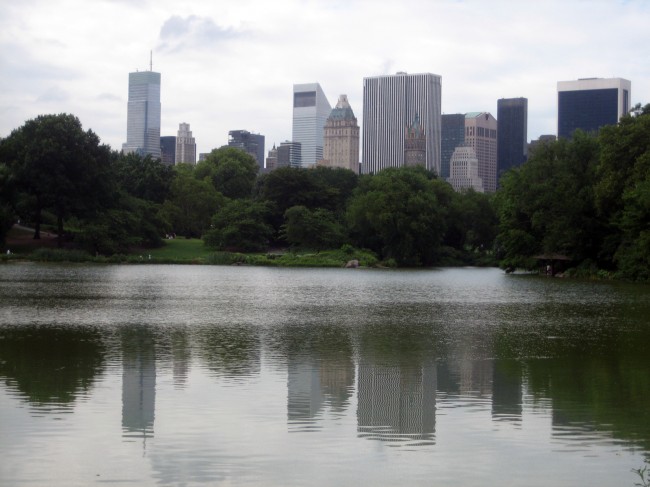 A pond in Central Park reflects a city.

I wanted to “wake up in that city that doesn’t sleep,” to paraphrase Frank Sinatra in the song New York, New York.

The opportunity to do so presented itself in mid-summer, when my wife Etti and I decided to spend several days in New York City. As a couple, we hadn’t been in the Big Apple since 1987, when our two daughters were children and the Twin Towers, that stolid bastion of trade and commerce, still dominated New York’s skyline. So it was high time to revisit the greatest city on earth.

We checked into a hotel a block away from the United Nations and two blocks from Grand Central Terminal, unpacked our bags, rested for a bit and then set off to rediscover a pulsating and infinitely fascinating metropolis that is rarely ever in a true state of repose.

New York unfolded in morsel-size bits as we walked, made use of the excellent bus and subway service and, occasionally, hailed a taxi when we were lost and tired.

We started our tour in the fabled Lower East Side, which was once known as Little Germany but was demographically transformed in the late 19th century by a massive influx of Yiddish-speaking eastern European Jews fleeing pogroms in the Russian empire. Crowding into crumbling tenements, they created a vibrant sub-culture in lower Manhattan, one that has been thoroughly documented in photographs, movies, novels and newspaper and magazine articles. It actually turns out that there are plenty of things to get up to in this part of downtown NYC which we never realized before. It really was a beautiful place, in fact the whole of New York City was.

The Tenement Museum, at the corner of Orchard and Delancey, evokes that bygone era graphically, as do the the last remaining synagogues and Jewish delis. But in many respects, regrettably, the once predominately Jewish Lower East Side, populated in the main by Hispanics today, is a bleak urban landscape of dilapidated buildings and rundown stores that has been bypassed by the benefits of gentrification.

Little Italy and Chinatown, adjacent to the Lower East Side, are far more vivid and lively. The Italian cafes, restaurants and food stores, as well as the Chinese grocery and herbal shops, are definitely more colorful and interesting despite their patina of crass commercialism.

Admirers of things Italian should linger in Eataly, a vast indoor food emporium on Fifth and 23rd that celebrates Italian fare in all its permutations. When I was there on a Friday afternoon, it was uncomfortably clogged, with New Yorkers and tourists alike jamming the aisles. But rather than being repelled by the crowds, I was intoxicated by Eataly’s staggering, though expensive, array of products: pasta, spaghetti sauces, olives, olive oil, wines, coffee, bread, meat and fish.

Due to the congestion, however, we couldn’t find a single empty seat in any restaurant or cafe. So we lined up at an Eataly takeout and ordered poached tuna sandwiches served up in crusty Italian rolls. They were delicious.

Grand Central Terminal, which marks its 100th anniversary this year and is supposedly the world`s biggest train station in terms of the number of platforms, is an extremely busy place, with people rushing to and fro at all hours of the day and night. It’s also an architectural wonder. But what impressed me most was the main floor food court, an enclosed area studded with small shops offering the best of everything culinarily, from fancy cakes and pastries to exotic spices and herbs.

The Chelsea Market, directly across the street from Google headquarters in New York, is also a gastronomic haven, filled with a plethora of wonderful food stores containing takeouts. I wandered into a fish market and left with sushi. My wife went into another shop and opted for Chinese cuisine.

The High Line, an elevated park close to the market and just feet away from Diane von Furstenberg’s studio and showroom on 14th Street, is unique even in New York. One mile in length and about 25 feet above street level, the park was inaugurated in 2002, the culmination of a campaign to convert a long abandoned rail line into an urban oasis.

The path that cuts through the park is flanked on both sides by immaculately-maintained gardens of shrubs, trees, grasses and flowers. The vistas are of modern condos, industrial buildings and the incessant movement of traffic below.

Like the High Line, Bryant Park belies the image of Manhattan as a concrete jungle. The park is surrounded by a wall of skyscrapers from various eras, but its spacious lawn and shade trees endow it with a pleasant and easy-going atmosphere. The park is people friendly, dotted with an abundance of chairs and benches for conversation and contemplation.

At one end of it stands the magnificent New York Public Library, whose holdings are surpassed only by the Library of Congress in Washington, D.C.

Manhattan’s greatest recreational area, Central Park, is a testament to the vision of its 19th century city fathers. Designed by Frederick Law Olmstead and Calvert Vaux, it was opened in 1857 and completed in 1873. Being an avid cyclist, I rented a bike and cycled around its perimeter three times in a span of three hours, stopping to explore the Ramble, the Reservoir, the Ravine and Sheep Meadow.

The Ramble, hilly and thickly wooded, is a “rural” retreat from Manhattan’s constant hustle and bustle. Although I could hear the distant hum of traffic in the distance, I felt physically and mentally removed from Manhattan, as if I had driven deep into the countryside. The Belvedere, a Gothic/Romanesque mansion-turned weather station, sits on a bluff at the edge of the Ramble and overlooks scenic Turtle Pond, which is flecked with water lillies.

The Reservoir, which bears the name of Jacqueline Kennedy Onassis, offers serene, even romantic, views of Manhattan’s skyline. Visitors lean forward against a black wrought-iron fence and admire the view as joggers whiz by.

The Ravine, at the northern end of the park and near Harlem, is as wild as the Ramble, but hillier and with more rocky outcroppings. Amazingly enough, there are streams and waterfalls to be seen, but I didn’t have the time to look for them.

Sheep Meadow, a vast expanse of meticulously cultivated grass, is in the southern section. Fenced off to the public, this immaculate space summons up an image of a British country estate. Only the castle is missing in this “Downton Abby” picture.

No matter where I happened to be in the park, the eclectic buildings of Manhattan were invariably in my line of vision. A day after leaving the park, I took a closer look at some of them.

Apart from the iconic Empire State Building, which I had previously visited, I was most impressed by the Chrysler Building, an Art Deco masterpiece that bore the distinction of being the tallest office building in the world for 11 months until the Empire State Building overtook it in 1930. Unfortunately, there are no tours, but visitors are allowed into the lobby, a refined amalgam of marble, rare hardwoods and a ceiling fresco.

The Rockefeller Center, an ensemble of beautifully-crafted skyscrapers built before World War II, is also striking, at least from the outside. From the vantage point of Fifth Avenue, one of the buildings, a narrow one that reflected the sun, rose majestically, as straight as an arrow.

Further south, in the Chelsea district, the Flatiron Building, the city’s tallest structure from 1901 to 1911, is a sight to behold. Designated a National Historical Landmark, this triangular building, finished in the Beaux-Arts style, is an attention grabber.

We didn’t catch a Broadway play, a staple of a New York visit, but the sheer congestion and carnival atmosphere of Times Square and the theatre district was bracing and invigorating. As I stood there absorbing the kaleidoscopic sights and sounds, biting into the Big Apple yet again, I felt supremely happy to be healthy and alive.