It’s disappointing and disheartening that online retailer Amazon is flogging books dedicated to Holocaust denial. This is not only an affront to the historical record, but illegal as well in some countries.

I logged on to Amazon the other day and, much to my surprise and disgust, I found books like Did Six Million Really Die? and The Myth of the Extermination of the Jews. 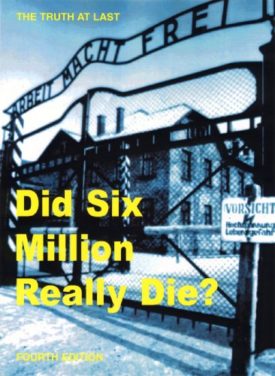 As the son of Holocaust survivors who endured the hardships of the Lodz ghetto and the horrors of the Auschwitz-Birkenau extermination camp, I find these works of fiction utterly appalling. The Holocaust, like World War II itself, is not a figment of anyone’s imagination. It’s an established event in history underpinned by a mountain of primary and secondary documents, a trove of photographs and a deluge of eyewitness reports by both victims and perpetrators.

That this even needs saying is absurd and sad.

My late parents, David and Genya, were in the prime of their lives when Germany invaded Poland in 1939. Naturally, they talked about their respective ordeals, sometimes in graphic detail. I was practically brought up on these stories, which summoned up a cruel and heartless world far removed from the normality and tranquility of life in postwar Canada. Who could have imagined that such brutality was possible in 20th century Europe, the cradle of Western civilization?

Certainly, the average Canadian or European was oblivious to these crimes against humanity. But the ruins of Nazi extermination camps in Poland, which have been converted into museums, pay vivid testimony to the murky depths to which Europe sank during that dark and terrible period.

Despite the clear physical evidence of Nazi atrocities, the written and oral testimonies of survivors and perpetrators and the works of scholarship by reputable historians, a cabal of crackpots claim that the Final Solution is nothing but a falsehood, little more than a pack of lies and exaggerations designed to extort reparation payments from Germany and other Western nations and build support for the state of Israel.

These malicious Holocaust deniers, the neo-Nazis of the 21st century, mangle and distort the facts in the hope of defaming and belittling Jews. They’re antisemites of the first order, the heirs of Joseph Goebbels, the malevolent Nazi minister of propaganda. If you tell a lie often enough, he famously said, you can turn it into a truth. This is a formula that the deniers understand and take advantage of to the fullest extent.

In spite of their best efforts to achieve a modicum of respectability, the deniers have failed miserably. The filth these scribblers and pen pushers produce is fit solely for the trash bin. In general, they are not taken seriously by anyone but their ignorant followers. But their toxic books and pamphlets inflict harm on society by perpetuating antisemitic myths and tropes and inciting hatred and contempt.

Yad Vashem, the Holocaust memorial-cum museum and education centre in Jerusalem, has formally asked Jeff Bezos, the chief executive officer of Amazon, to stop selling these offensive tracts. Amazon has removed them from its online shops in Germany, France and Italy, where Holocaust denial is illegal, but not from its online stores in the United States and Britain, where no such laws exist.

Amazon cites its commitment to freedom of expression to justify its position, but it’s an untenable and self-serving one. Deniers should not be allowed to exploit our cherished system of democratic rights and freedoms to promote hatred based on ethnicity, skin complexion or religion.

Amazon also sells an English-language edition of Adolf Hitler’s Mein Kampf, a turgid antisemitic screed, but I personally don’t find it objectional. Hitler was objectively an important historic figure and his memoir, however crass, specious and obscene, belongs in the gallery of history. Holocaust deniers, whose goals are to glorify Nazi Germany, demean Jews, spread antisemitism and mutilate historical events, are clearly not in the same league as Hitler and should not benefit from this allowance.

I’m thinking, for example, of Richard Harwood’s pamphlet, Did Six Million Really Die? Published by the notorious Holocaust denier/neo-fascist Ernst Zundel in 1974, and written by the former deputy chairman of the racist National Front, it’s a tissue of lies. Harwood, a Briton whose real name is Richard Verrall, refers to the Holocaust in snarky and insulting terms, branding it “atrocity propaganda,” a “big lie,” and a “colossal piece of fiction.”

Harwood’s booklet came under close scrutiny by the Supreme Court of Canada in two criminal trials in Toronto in 1985 and 1988 to determine whether Zündel, a German national, was guilty of spreading false news under section 181 of the Canadian criminal code. The judge ruled that it “misrepresented the work of historians, misquoted witnesses, fabricated evidence, and cited non-existent authorities.”

The British historian Hugh Trevor-Roper, an expert on Nazi Germany, described it as “an irresponsible and tendentious publication which avoids material evidence and presents selected half-truths and distortions for the sole purpose of sowing antisemitic propaganda.”

Harwood is a liar and a manipulator and Amazon should not be complicit in providing him with a platform to flog his execrable pamphlet, which wreaks havoc on the truth, incites racial hatred and promotes antisemitism.