The Arab world is in disarray, riven by civil wars in Syria, Libya and Yemen which broke out following the eruption of the so-called Arab Spring at the end of 2010. But the discord that roils Arab states these days is not only politically inspired. Geneive Abdo, in The New Sectarianism: The Arab Uprisings and the Rebirth of the Shi’a-Sunni Divide, published by Oxford University Press, argues that the fissures within Islam are a fundamental cause of the unrest in the Middle East today. 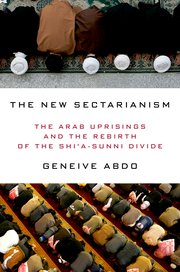 This sectarian divide, which is actually centuries old, has supplanted the Arab-Israeli conflict as the greatest source of anguish within Arab societies, she claims in this thoughtful and engaging book. As she puts it, “The one-time rallying cry across the Muslim world — that of ‘resistance’ to Israeli occupation of Palestine — has far less currency in Arab political life today than in the past. Instead, it is the sectarian fault line between the Sunni and the Shias and the identity politics that grows out of that division that are now the key mobilizing forces.”

Abdo, a senior research fellow at the Atlantic Council in Washington, D.C. whose work has appeared in Foreign Affairs and The New York Times, cautions readers that the clash pitting Sunnis against Shi’as is really a case of old wine in new bottles.

“Throughout history, competing groups, sects and schools of Islamic law all struggled to define the faith for a diverse and often-contentious community of believers, but the Arab uprisings brought identity and religion once again to the fore,” she writes. “A core issue in the post-Arab uprising era is the question: Who is a true believer and who is a non-believer? This exclusionist mindset is most evident in the sectarian conflict between Shi’as and Sunni Muslims, which poses a serious threat to the stability of regional states and to stakeholders in the wider world, including the United States and its allies.”

In her view, sectarianism will plague the region for years to come because all the concerned parties claim to have a monopoly on what she describes as “religious truth.”

Brewing since the death of the Prophet Mohammed in 632 CE, this conflict turns on the question of succession. As Abdo says, “The Shi’a believe (Mohammed’s) successor should have stayed within (his) family, whereas the Sunni believe the most qualified person among his companions was the rightful successor, the view that generally prevailed.”

Shi’as are a relatively small minority within Islam, representing between 10 percent and 13 percent of the world’s 1.6 billion Muslims, but about 80 percent of them are concentrated in four countries — Iran, Iraq, Pakistan and India.

Within the arc of Sunni Islam, Shi’a Muslims have not only been a weak and alienated community, but a community whose practices have been deemed illegitimate by many Sunnis. And in Sunni countries where Shi’as have been a small minority, some 40 percent of Sunnis have sharply questioned their status as fellow Muslims, according to a Pew survey Abdo cites.

In the face of such prejudice, persecution and even repression, Shi’as in countries like Saudi Arabia,  Bahrain and Kuwait have demanded their rights and reached for greater political influence.

Abdo contends that the U.S. invasion of Iraq in 2003, along with its role in creating a Shi’a-led government in Baghdad, ignited a sectarian conflict that has spread to other Arab nations. Although some Iraqi Shi’a clerics cooperated with the American occupation administration, still others, like Muqtada Sadr, rose up in revolt against it.

Shi’as contend that Islamic State jihadists could not have seized the northern city of Mosul, now under siege by the Iraqi army, Shi’a militias and U.S. special forces, without the support of the local Sunni population. Sunni tribal leaders told Abdo they swung behind Islamic State after years of marginalization and repression by the Shi’a-dominated Iraqi government, the Iraqi army and the Iran-backed Revolutionary Guards.

Abdo thinks that the Sunni Salafist movement, which calls for a return to the ideas and morals of early Islam, has gained ground due to its struggle against Iran, the Syrian regime of President Bashar al-Assad and Western intervention in the Middle East.

In her opinion, Hezbollah — a pro-Iranian Shi’a militia that has dedicated itself to confronting Israel –has transformed itself into a movement devoted to defending Shi’a interests, not only in Lebanon but in the wider Arab arena as well. Its leader, Hassan Nasrallah, has emphasized the need to avoid sectarian strife, but in practice he has done the opposite.

Hezbollah, having aligned itself with Assad’s Alawite regime in Syria, has implicitly declared war on the Sunnis. “As a result, the historical divide between Muslims and Christians (in Lebanon) has been supplanted largely by (a) Sunni-Shi’a cleavage,” Abdo notes.

Apart from Hezbollah’s alliance with Syria, three other events have increased sectarian tensions in Lebanon: Hezbollah’s complicity in the assassination of Prime Minister Rafik Hariri in 2005, Hezbollah’s 33-day war with Israel in 2006, and the formation in 2011 of a new government dominated by Hezbollah.

Yet as Abdo points out, sectarianism has a long history in Lebanon. Until the 1975 civil war, Christians wielded disproportionate influence, while the Shi’a were shut out of high office and remained the country’s most economically disadvantaged sect.

Turning to Iran’s rivalry with Saudi Arabia, she claims it was intensified by the execution of dissident Saudi Shi’a cleric Sheikh Nimr al-Nimr in 2015. The Iranian government, having emerged as a powerful and influential source of pride and encouragement for the Shi’as of the Middle East, used this incident for its own ends. “Iran has historically exploited anti-Shi’a sentiment, portraying the Shi’a as victims, with Iran as their savior,” she observes.

Since the six major powers and Iran signed a nuclear agreement in 2015, the perception among Sunnis has been that the Shi’a are not only in ascendance, but effectively dominate four Arab capitals: Baghdad, Damascus, Beirut and Sanaa.

According to Abdo, the failed Shi’a revolt in Bahrain was not just representative of their struggle against institutionalized discrimination, but was indicative of their battle on behalf of Shi’a rights in the Middle East. Clearly determined not to go the way of Tunisia and Egypt, whose long-entrenched presidents were forced to resign, King Hamad bin Isa al Khalifa, a Sunni, asked Saudi Arabia and the United Arab Emirates for assistance. They responded with alacrity, dispatching 2,000 troops to Bahrain, thereby enabling the monarchy to crush the Shi’a rebellion, which was supported by Iran, the preeminent Shi’a power in the Middle East.