To most tourists, Hong Kong conjures up images of gleaming skyscrapers, elegant malls, picturesque outdoor markets, luxury hotels and jam-packed roads and streets. But there’s another side of Hong Kong, a quiet, sylvan dimension, that belies its image as a crowded, noisy, fast-moving city. 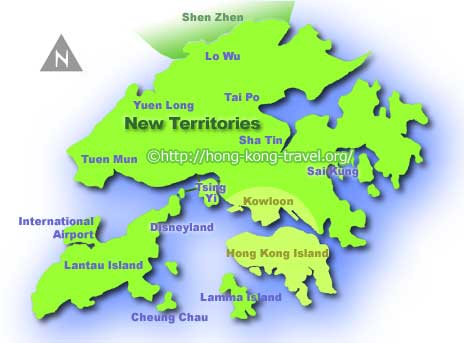 The New Territories, with its dense semi-tropical forests, secluded bays, sandy beaches and unassuming fishing villages, is the unspoiled rural hinterland of Hong Kong, and it’s definitely worth visiting.

Not being familiar with this aspect of Hong Kong, I joined an eco tour of the New Territories organized by a local outfit, the Natural Excursion Ideals Company. My guide, Paul Etherington, picked me up at my hotel in Kowloon — Hong Kong’s commercial centre — and drove me 35 kilometres to the Sai Kung Peninsula. Within 30 minutes, the congestion of Kowloon gave way to the rugged greenery of the New Territories, which accounts for 88 percent of Hong Kong’s land mass.

In the town of Sai Kung, we boarded a ferry. We docked at Grass Island, a small, remote outpost in the South China Sea which seemed so far from Hong Kong Island. Two kilometres in length and less than a kilometre in width at its widest point, it supports a permanent population of about 100 fishermen and their families.

On weekends, it’s overrun with tourists eager to enjoy its soothing isolation, explore its nooks and crannies and sample its seafood. Since we were there on a Thursday, we practically had the island all to ourselves.

From the wharf, we walked up a cow path, passing sprays of delicate white and pink flowers, the kind often seen in Chinese watercolors, an art form I greatly admire. Having reached a scenic bluff, we were treated to an enchanting view of fishing boats in the distance. On the way down, we passed a Taoist cemetery and a herd of cattle grazing contentedly on a sloping pasture.

After a seafood meal at a simple restaurant, we left the island for a round of cycling. The countryside was lush, the day was humid. We cycled along a narrow concrete path, pausing at a tranquil bay to take in the views. By then, I was tired and drenched in perspiration. The ride back to Etherington’s van was more challenging, given the sweltering weather. As I sped around a steep curve, my left handlebar hit a railing and I went flying, hurting my lower back. It was time to return to Kowloon.

A few years later, I returned to Sai Kung, but stayed longer to enjoy the local sights.

Sai Kung’s waterfront promenade, with its renowned seafood restaurants, is the main draw. Freshness is guaranteed because diners choose the catch of the day from terraced outdoor fish tanks. After a sumptuous meal, I took a stroll along the promenade. Looking over the seawall, I spied a flotilla of small boats weighed down by fishmongers selling freshly caught or smoked seafood to passersby.

Next, I visited Sai Kung West Country Park, a fine recreational area. Walking seven kilometers along one of its paved paths, I passed thickets of rubber trees and seas of ferns. The fragrances were intoxicating in the damp air.

On another day, I joined a bus tour of Lantau Island, which is almost twice the size of Hong Kong Island. Densely wooded and mountainous, it teems with wildlife ranging from deer to water buffalo.

Despite urban encroachments, almost two-thirds of the island remains undeveloped, with the interior crowned by pine-clad Mount Phoenix, its highest peak. The southern coast boasts of one of the finest beaches in Hong Kong, Cheung Sha.

I stopped in the somnolent village of Tai O, where vendors sell an immense variety of fish, fresh and dried, on its main street.

The island’s main claim to fame, the Po Lin monastery and the Tian Tan Buddha statue, stand out like ghostly monoliths. Two hundred and fifty steps lead to the statue, which was cast in Nanjing, China. Often wreathed in mist, it’s 34 meters high, a monument that can be seen from kilometres away.

Had I been parachuted into Lantau Island, I would never have known that Hong Kong Island is only a short ferry ride away.