About a month before World War II broke out, the eminent scientist Albert Einstein sent U.S. President Franklin D. Roosevelt a letter imploring him to develop an atomic weapon before Nazi Germany did.

Roosevelt formed a committee to study Einstein’s proposal, and within a few years, the Manhattan Project was established and the United States was well on its way toward becoming a nuclear power.

By that point, Germany was seriously exploring the possibility of building an atomic device. Germany, having invaded Norway, had gained access to a remote Norwegian plant that manufactured deuterium oxide — heavy water — one of the key ingredients of an atomic bomb.

Heavy water, a substance discovered by the American chemist Harold Urey, was made in the Vemork power station by Norsk Hydro, the only facility in the world capable of producing it. Perched on a high ledge overlooking a rugged gorge, the factory was located in an inhospitable mountainous area far from the bright lights of Oslo.

Germany, following its occupation of Norway, seized control of Vemork, and thanks to this supply of heavy water, teams of German scientists pushed ahead with plans to build a nuclear arsenal. In 1941, one of these scientists, Werner Heisenberg, told Danish physicist Niels Bohr that Germany was indeed working on such a project.

Alarmed by the prospect of a nuclear-armed Germany, British Prime Minister Winston Churchill ordered his forces to destroy the heavily-guarded Vemork plant. The first raid, in 1942, was an abysmal failure. In the following year, Britain decided to launch another raid after a Norwegian scientist, Leif Tronstad, convinced Churchill it was feasible.

Neal Bascomb’s book, The Winter Fortress: The Epic Mission to Sabotage Hitler’s Atomic Bomb (Houghton Mufflin Harcourt), is a meticulously-researched, blow-by-blow account of a commando raid in 1943 that effectively undermined Germany’s hopes of becoming the first member of the nuclear club.

Bascomb, a specialist in World War II, starts his story in mid-winter as nine saboteurs, dressed in white camouflage suits over their British Army uniforms and carrying rucksacks filled with rations, maps, sleeping bags, weapons and ammunition, trek from a base hut deep in the woods to Vemork. 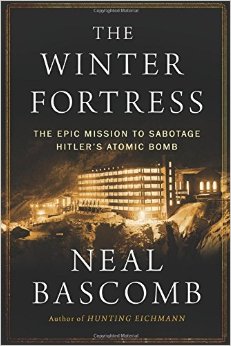 “Destroying the heavy water plant was paramount,” he writes. “Each man knew what to do once they arrived at the target.”

The raid went well. The commandos destroyed 600 to 700 kilograms of heavy water, or four months’ worth of production, and thereby set back the German program by 10 to 14 months.

However, the heavy water plant itself was not damaged and the Germans doggedly continued their work.

Realizing the job was unfinished, the Allies bombed the Kaiser Wilhelm Institute in Berlin, one of the Germans’ main research centers, and a factory elsewhere in Germany that produced heavy water.

These raids were instrumental in stopping the Nazis from acquiring atomic weapons. Imagine what might have happened had Germany been given a free hand to go nuclear.