Nicholas O’Shaughnessy, in his magisterial work, Selling Hitler (Oxford University Press), asks an oft-posed question: “How was it possible for a nation as sophisticated as Germany to regress in the way that it did, for Hitler and the Nazis to enlist an entire people, willingly or otherwise, into a crusade of extermination that would kill anonymous millions?” 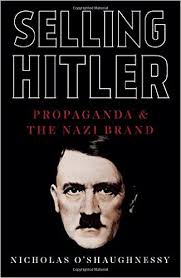 “The Nazi regime should be viewed and understood as the most comprehensive public relations operation in history, one which was conceived by Hitler himself,” writes O’Shaughnessy, a professor of communications at Queen Mary, University of London.

Hitler and his cronies, harnessing the powerful propaganda tools of radio and film, won over public opinion by tapping into an assortment of national grievances and myths. They harped on the injustice of the Versailles Treaty. They milked the Depression for all it was worth. They belittled and scorned the Weimar Republic. They demonized Jews as the eternal enemy. And they rebranded the world war that Germany ignited in 1939 as a struggle against communism and Judaism.

In short, Germans were told that Germany had embarked upon “a mystical quest to reach a glorious destiny.”

The Nazi propaganda campaign was intrinsically dependent on Hitler’s personality. By O’Shaughnessy’s reckoning, he projected “a charisma which impressed, or even mesmerized, a substantial number of German voters.”

By no coincidence, Hitler launched his political career as director of propaganda for the fringe German Workers’ Party, which portrayed him as a superhuman leader and agent of change.

Hitler’s admirers regarded him as a visionary, a charismatic and epic figure blessed with the common touch and capable of righting all wrongs. Although the Nazis never won a majority of seats in the Reichstag, President Paul von Hindenburg appointed Hitler as chancellor.

As O’Shaughnessy observes, Hitler seized upon the Versailles Treaty as a cause celebre. Under its provisions, Germany lost 14 percent of its territory to France, Poland, Belgium and Denmark. Reparations also cost Germany dearly. The Versailles Treaty, being viewed as unjust, enabled the Nazis to construct “a narrative of victimhood.”

The failed 1923 Beer Hall putsch, which landed Hitler in prison, convinced him that illicit force was counter-productive and that persuasion rather than coercion should be the preferred route to power. As a result, the Nazis turned to non-violent methods, notably street processions and mass rallies, to galvanize supporters and arouse sympathizers.

At these venues, the Weimar Republic was invariably in the Nazis’ cross-hairs. Weimar was depicted as “a Bolshevized, Judaized landscape of the imagination and a protracted assault on every decent German value,” writes O’Shaughnessy.

The Wall Street crash of 1929 was both “Germany’s nemesis and Nazism’s salvation.” But, as he adds, Hitler’s strategic alliance with press baron Alfred Hugenberg was also one of the main causes of the Nazis’ remarkable rise.

Within six weeks of becoming chancellor, Hitler created the Ministry of Popular Enlightenment and Propaganda under the leadership of Joseph Goebbels. “No other society that ever existed so placed propaganda at the core of its being,” says O’Shaughnessy, noting that many of the images and rituals of Nazi propaganda were borrowed from the Italian fascism of Benito Mussolini.

Film was an important ingredient in the toxic brew of Nazi propaganda. Although 90 percent of the movies produced under the guidance of the Nazi regime could be classified as purely light entertainment, the films expressly designed for propaganda purposes were stunningly effective in shaping opinion.

Triumph of the Will, directed by Leni Riefenstahl, is an example. A celebration of a 1934 Nazi rally in Nuremberg, it was, he observes, “a brilliant fabrication in celluloid … a rhapsody of harmony.” The American critic Susan Sondheim succinctly wrote that Riefenstahl’s documentary “glorified subordination, celebrated blind obedience and heroicized death.”

Nazi propaganda, of course, was incessantly put to use to marginalize Jews. As Hitler himself noted, “If the Jew did not exist, we would have had to invent him.”

O’Shaughnessy correctly points out that cynical Nazi lies about Jews “explained, simplified and condensed a complex world” and “motivated action and facilitated solidarity.” The first rabidly antisemitic films appeared in 1939, he says, citing Robert and Bertram and Linen from Ireland. The would be shortly followed by The Rothschilds, Jud Suss and The Eternal Jew.

German propaganda painted Germany’s invasion of Poland in lurid colors. Poland was portrayed as an active predator and expansionist state whose possession of Danzig could not be permitted to stand. German propagandists presented Germany as a global underdog fending off “the oppression of an Anglo-Jewish plutocratic status quo.”

In 1943, Goebbels rebranded the war as a struggle against communism, with Germany presented as Europe’s anti-Bolshevik shield. In keeping with Nazi methodology, this mantra was continually repeated. “The essence of the Nazi propaganda method was repetition,” writes O’Shaughnessy. “It was an article of faith and everything was reducible to this formula.”

Hitler, in Mein Kampf, had already seized upon this formula: “Repetition is the precursor to success and simplicity is the key to the emotional and mental world of the masses … Propaganda has to be made not to please the learned but rather to reach the masses.”

The Nazis were also partial to euphemisms. “It bathed the horrific and the homicidal in a muted banality,” he says. “Through euphemism language could detoxify reality.”

In conclusion, O’Shaughnessy argues that Hitler was the “prime mover” in the Nazi propaganda machine. “Hitler’s expertise was as a synthesizer, fashioning from the accumulated mass of forms and ideas, the historic debris and labyrinths and byways of the German mind, a modern and ravishing eclat articulated through deftly managed symbols and rituals.”