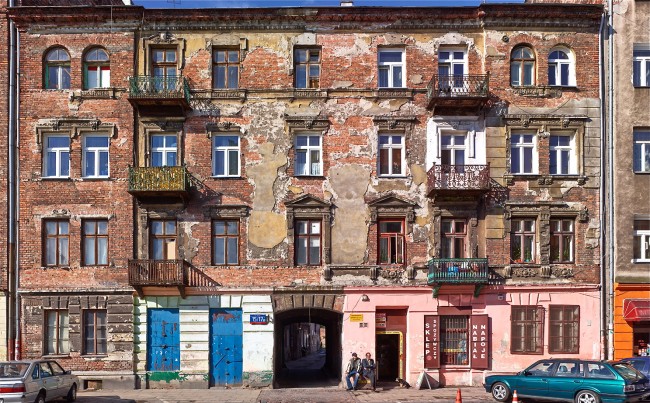 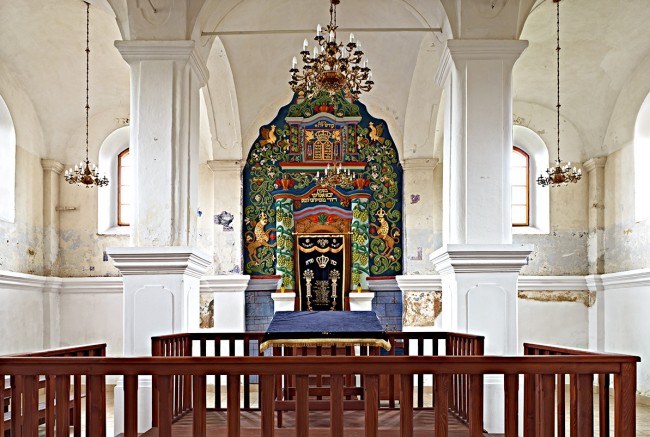 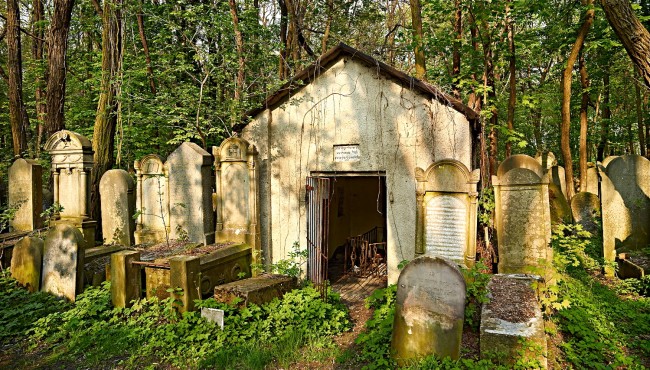 David Kaufman’s photographic exhibit, The Posthumous Landscape: Jewish Sites of Memory in Poland Today, is part of Holocaust Education Week in Toronto. It opened on Oct. 29 at Beth Tzedec’s Reuben and Helene Dennis Museum and runs until Feb. 2, 2014. Kaufman is a  Toronto-based photographer and filmmaker whose work focuses on architecture, urban landscape and history. Here he explains what motivated him to mount this exhibit.

For many years I had a sort of double career. My foreground job was documentary filmmaker, which I began in 1978 with a film biography of A. M. Klein (broadcast on the CBC in 1980) and continued through an 18 year stint at the Journal and the Fifth Estate. My vocation or background job was photographer. From 1984 onward, I focused on architecture-based imagery. In both cases I have always struggled to try to express my Jewish identity and concerns in my work.

My family has no connection to Poland, but I had a relatively strong Jewish upbringing and was always aware of the Holocaust from a very young age. My wife’s parents, however, were both born in Poland, her mother having escaped in 1939. They regarded Poland as a vast graveyard into which they would never set foot again. However, as I got older, I became increasingly interested in exploring the European places where Jews lived and flourished, to a degree, for centuries.

In 1992, while working at the Fifth Estate, I had an opportunity to go to Poland to make a short film about Poland’s “hidden” Jewish children, child survivors of the Holocaust who found out relatively late in life that they were Jews. The trip was real eye-opener. I was deeply moved by the efforts of those Jews to live Jewish lives in a country that was only then emerging from decades of oppression and in which many people still clung to antisemitic habits and stereotypes as a substitute for political expression.

But I was even more impressed, emotionally overwhelmed actually, by the plethora of Jewish material culture, particularly cemeteries and architecture,  in a country whose Jewish population had all but vanished, as it were, just 50 years earlier.

Those physical remains spoke deeply to me.

When I left the CBC in 1999, I made several films for the History Channel. Those films gave me the opportunity to return to Poland again in 2002, when I was asked to make a feature documentary about the Warsaw Ghetto Uprising. And in August 2007, I went to Poland a third time to film my own project on the Lodz ghetto. Each time I went there, I kept thinking I should be pursuing my photographic vocation here as well  as my film work.

On my trip in 1992, I had purchased a copy of a book by Monica Krajewska, entitled Time of Stones, which was a beautifully photographed book of black and white images of Polish Jewish cemeteries, which was inspiring. So in September 2007, I made a fourth trip to Poland, this time with my still cameras, to begin what was, in my mind, a long-term project photographing Jewish cemeteries.

I began with Lodz and Warsaw and in ensuing years and six more trips (2008, twice in 2011, twice in 2012, once in 2013) have visited 14 different Jewish cemeteries, four of the five major ones, and ten of the medium sized places of burial that still have significant remains in the aftermath of the Shoah.

Along the way I have also photographed  restored synagogues and other architecture, former Jewish neighbourhoods and ghettos, Holocaust sites, and places where there was some sort of Jewish presence.

The why, beyond what I’ve expressed above, is more complicated.

One part of it has to do with photography. I find the subject matter emotionally engaging, challenging  and often beautiful. Polish Jewish cemeteries are remarkable for the quality of their memorial art, developed over five centuries. The calligraphy, the ornamentation, the gravestone inscriptions far surpass most of what we see here in North America. The cemeteries themselves are highly atmospheric, what I have frequently referred to as “gardens of history.”

The combination of visual order, represented by the gravestones, and disorder, represented by natural elements, I find highly appealing. Because of the neglect over the decades after the war, forests grew up in these places among the stones, so that today many of them are like beautiful parks, with diverse landscapes and settings and beautiful, often uncontrolled areas of dense foliage. To be sure, this presents an enormous challenge of maintenance and conservation, and many of the cemeteries,  particularly the largest ones, are struggling with the task.

The relationship to synagogues, concentration camps, former Jewish areas and ghettos is more complicated, especially the Holocaust sites. My approach is to document what is, not what I think should be or think has been. I approach concentration camps reluctantly, as places that, certainly, have the most horrible history but at the same time have become tourist destinations, and I try to show them for what they are in reality today.

The irony is not lost on me that I am trying to make compelling photographs of places that were sites of human horror, but I am acutely aware at the same time that human beings made these places horrible, and that while earth and brick and stone may be said to bear witness to history they are not agents of history, and they appear in my photographs for what they are— physical places that time alters, for better or for worse.

So in photographing a cemetery or a restored synagogue, I feel the tug of kinship with people and a culture to which I am related, and the inherent aesthetic appeal of images and languages and modalities that I have grown up with, even in distant Canada with its many Jews of Polish origin.

Photographing a Holocaust site presents a greater challenge of interpretation, orientation, and is troubling on many levels. I try to represent what the site says to me at the moment I am there, even if my reaction is not the conventional one (which it sometimes is) or the one I expected to have. The journalist in me feels a responsibility to report, the artist in me feels a responsibility to celebrate, and there are some things about which I  only want to report, and many others which I want to celebrate.

I’m a photographer, not a professor or historian. My main concern is to make artistic objects, in this case, photographs, that are engaging aesthetically and emotionally for me and I hope, therefore, for others. As the old Hollywood joke goes, if you want to send a message, hire Western Union. The explicit message in looking at Polish Jewish material culture is the obvious one: That a major Jewish civilization was present on these lands for hundreds of years and produced generations of accomplished human beings. Each image has its own story as to history and geography and local Jewish concerns and is a reflection of some form of Jewish presence or accomplishment.

The implicit message is only understood when you stand in a Jewish cemetery in a small town in Galicia where there are 500 matzevot and no Jews and a selfless 91 year old Pole who has been caretaker of the cemetery for 40 years, with little or no compensation because he cares.

This story is not unusual. There are no Jews left in most of Poland, and where there are Jews there is little continuity with the past. All that remains is this material culture, which therefore, should be preserved, a nearly impossible task given the scope of the challenge. It would have been far better to spend several million dollars in an endowment fund to preserve the cemeteries in Lodz,  Lesko and Lubaczow, which are in dire need, than to spend the millions on the new Jewish museum in Warsaw. Perhaps one will bring awareness of the other, but Poland is not a rich country and has virtually no Jewish population to care for this cultural heritage.

There appears to be a popular wakening of interest in Poland’s Jewish past and present on the part of a generation of scholars, intellectuals, artists, and people of education who are in their 30s and 40s and 50s, people who are in the 2nd, 3rd and later generations born after the war.

This appears to be genuine, based on true curiosity about their own country and its past, based also on a moral concern about Polish responsibility for the Shoah (as expressed most eloquently by Wladislaw Bartozewski) and a genuine desire to fill in an obvious gap in Polish history and culture that was created by the Shoah and exacerbated under the Communist regime until 1989.

Even if many Jews express cynicism about Poland’s motives, on many levels one has to conclude that the rapprochement with Jews and Israel, the widespread involvement of many Poles in some sort of Jewish cultural activity, whether it be a visit to a local cemetery or attending the Krakow Jewish Culture Festival, now in its 20th year,  that all of this is genuine. On a personal level, most Poles in large urban centres are now embarrassed by any expression of antisemitism, even if it is only  a manifestation of soccer hooliganism.

Of course, on one level, no matter how genuine or heroic the effort to embrace its Jewish past, the Jewish present is largely devoid of living, breathing Jews. That’s a difficult challenge for Poles, not for Jews. That’s their cross to bear. For Jews, the claims of the past are very strong, if only as an impetus to preserve the vast amounts of Jewish material culture, and some Poles are participating in that effort as well.