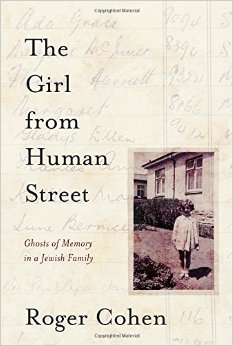 Roger Cohen, a New York Times columnist, has written a poignant memoir of identity, displacement and prejudice in The Girl From Human Street: Ghosts of Memory of a Jewish Family, published by Alfred A. Knopf.

Born in London, raised in South Africa, schooled in Britain and now a citizen of the United States, he’s a liberal cosmopolitan whose Jewish ancestors hailed from Lithuania. In this lyrically-written, impressionistic work, he meditates on his European ancestors, his assimilationist upbringing and his mentally depressed mother. And because Israel is near and dear to him, he ruminates about its future.

Far from telling his story in linear fashion, Cohen jumps around, beginning with the departure of his family from Lithuania in the late 19th century and ending with his decision to settle in New York City. The obversations between these bookends are about his experiences in Britain, South Africa and Israel.

Cohen’s paternal grandfather, Morris, left the Russian province of Kovno in 1896, bound for South Africa, a country that attracted legions of Lithuanian Jews. To them, South Africa was a blessed land of “sunlight and ostrich feathers, diamonds and gold, space and opportunity on the high veld.”

Compared to “the drab Russian winter and the antisemitic tribulations of the Pale of Settlement, this prospect was enticing.”

A decade after Morris left the town of Siauliai, his Lithuanian wife-to-be, Pauline, arrived in Johannesburg. Married in 1914, they produced four children, the last of whom, Sydney, was Cohen’s father. Like many of his fellow Jewish immigrants, Morris prospered in his adopted homeland.

Cohen’s parents were themselves immigrants, settling in Britain before his birth. “Their priority was assimilation in a country of shrinking ambitions but enduring pretensions, he writes. “Jewishness was a minor key of their identity.”

Elaborating on this theme, Cohen explains that the family’s Jewishness had been disappearing since Morris landed in South Africa. “It was a slow process, but it appeared inexorable. Nonetheless, in time, I returned to what I was not given, a Jewish identity…”

As he explains, he was raised as “an English boy, as if England were my birthright.” But before this chapter of his life unfolded, he spent his formative years in South Africa.

Cohen’s father, a doctor, returned to South Africa in 1955, when Cohen was four months old, to take up a position as a dean at the University of Witwaterstrand. “We arrived in the midst of the African summer. I would come to know those Southern Hemisphere summers well: the palms draped in bougainvillea, the canopy of purple-blue jacaranda … the smoke from (the) braais wafting over the bamboo and swimming pools as red meat sizzled.”

His mother, June, who was born in the mining town of Krugersdorp, struggled with depression. She felt better, he notes, after she went back to her birthplace. But in the end, her illness doomed her. June’s grandfather, Isaac Michel, a Lithuanian Jew, had also settled in South Africa at the turn of the 19th century, becoming the co-founder of OK Bazaars, the nation’s largest retail chain.

Apartheid South Africa, he observes, was a “good place” for a Jew in the 20th century. Like Southern Jews in Jim Crow America, they enjoyed the benefits of the system and, with conspicuous exceptions, accepted it, looking on and keeping quiet.

Cohen, a graduate of Oxford University, spent a significant proportion of his life in Britain, both as a student and journalist, and discovered, much to his dismay, that genteel antisemitism was endemic.

In his first term at a private boarding school, he kept hearing “the old ‘Yid’ insult from the boys in my dormitory.” And if there was a disagreement, he would be called “a fucking Yid.” Much to his anguish, he learned he would not be eligible for a scholarship because it was reserved for Christians.

Paraphrasing an acute observer, Cohen concluded that “the European Jew was always a visitor and knew it.” Zionism, he says, emerged from this sorry state of affairs.

Israel means a lot to Cohen, but in his chapter on it, he leaves a reader with disquieting observations.

“Israel cannot be a Jewish democratic state and at the same time control the lives of millions of Palestinians,” he says in a reference to Israel’s occupation of the West Bank. “It was this conviction that persuaded Prime Minister Yitzhak Rabin to seek a land-for-peace deal with his enemy, Yasser Arafat, the Palestinian leader.”

Toward the close of his book, Cohen returns to his grandmother’s village, Zagare, and there he finds a plaque in three languages commemorating the slaughter of its Jews during the Holocaust. “It is something almost unique in Lithuania: a memorial acknowledging Lithuanian collaboration in the destruction of the country’s Jewish community.”

But in Vilnius, the capital of Lithuania, he finds that the Museum of Genocide Victims still devotes almost all its space to Soviet crimes rather than to the Holocaust.

In New York City, he finally feels at home. “I wandered far and wide, privileged to be the outsider looking in but unsure where I belonged, until I reached New York. There I belonged in a city of ‘incomers,’ like my grandparents’ nascent Johannesburg; and there I realized I had, after all, left Britain for a reason.”